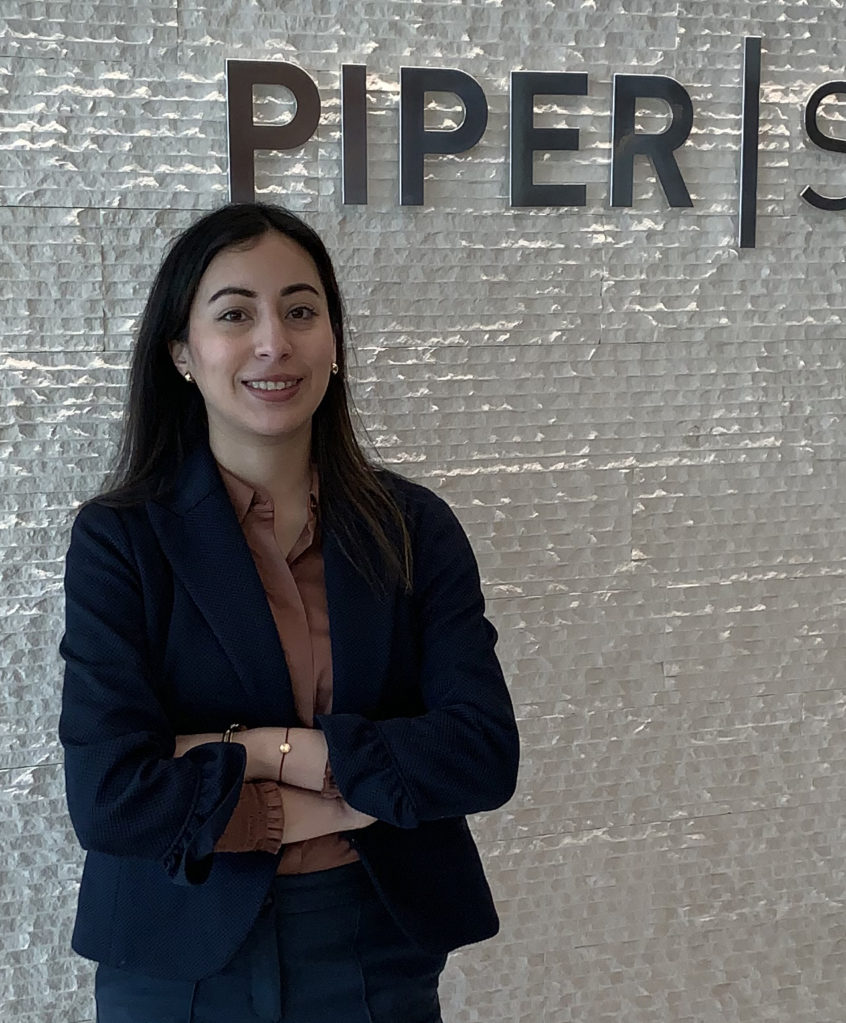 I first met Daniela (CRSM ’10, St. Mary’s University ‘14) at an alumni party in downtown Chicago. She agreed to speak with me about her travels from North Chicago to Honduras to Minneapolis and back again.
Her casual demeanor and winning personality belies an intensely independent and ambitious person who has her own definition of success.

I’m glad we got to meet at the alumni function.  Obviously it’s going well at Piper|Sandler and you like living in the city – it’s a lot different from North Chicago, Illinois…

Different from Minnesota too – I spent time in Minneapolis after graduating from St. Mary’s University. I was working on child protection cases and studying for the LSAT. It was a one of my “trying” times, I realized that I didn’t want to be a lawyer.

But that’s good right? It’s pointless becoming something you don’t want to be.

Well yes, but I’ve never thought of myself as a quitter – so this was an uncomfortable decision. Now I know I had to do it.

I saw that you played basketball at CRSM – no quitting there. Let’s talk about your time in North Chicago and at Cristo Rey.

Sure. I did grow up in North Chicago, and I was in Honduras for a short time when I was little. There were many challenges after that. I had to go to speech classes – which kept me out of theater. That was very frustrating. Now that we’re talking about it, [laughing] The King’s Speech is my favorite movie!

Thanks. Unfortunately, when I was in seventh grade the family started experiencing problems. Which was very rough on me and my younger brother. It seemed like they were never going to end. As our financial situation worsened, Mom was forced to work two jobs. As a naturalized citizen from Honduras, she had a language barrier to overcome. My father was hospitalized. There were relatives facing incarceration. At one point it looked like we were going to become reliant on Catholic Charities for help.

How did you get through it all?

My mom was a big motivator for me – and the teachers and staff at CRSM. The College Counseling Department really helped me keep a positive mind while encouraging me to apply to college and look for scholarships. My CWSP internships added to my courage and supported our family’s ability to keep moving forward. There was a lot of caring and support.

Was it your mom that got you to Cristo Rey?

Absolutely. She insisted on it. She kept it simple, “Go to college and get a job in an office, start a business – or work in a factory like me…choose.”
She is a tough woman. We didn’t get along for some time. I was always questioning her. My CRSM counselor said, “one of these days you’ll find yourself having drinks with her”. I said, “NO! I will NOT be doing that.” [laughing]…now I am!
Looking back, I think the combination of my questioning everything, my curiosity and her “toughness” made me always pursue what interested me. Take the initiative. Do it for myself.

You were obviously a curious kid, and also industrious.

Before CRSM, I was taking jobs cutting the neighbors’ lawns. Witnessing the hardships that my parents went through – hearing, “no we can’t afford another pair of shoes”, was part of becoming independent and ambitious. I just recently found some letters that I had sent to my dad…they were filled with remarks about going to college, getting scholarships, about getting what I want.

You got all of those things. CRSM seems to have been a good fit for you.

Without question. My work study experiences with city hall documents at the Village of Gurnee, and payroll work at ProData Workforce Solutions were huge.  I loved the extracurriculars. The College Counseling Department helped me apply and win a 1st Gen Scholarship. My classes in History, Theology, and Spanish ignited my love of anything “liberal arts” and made me think outside of the box. I was at PADS with Campus Ministry and I still have all the cards and letters from my retreats.

You’re an outgoing person, I’m always interested in the transition from CRSM to college, how’d you do?

It was challenging. Not because of leaving home, that was always the goal. It was more of the cultural shift – you know, a small town in Minnesota, so different. I volunteered with C2C (Count Down to College), they help quite a few students make what can be a difficult transition. I was committed; I was given a full ride. Ultimately, a smaller, one-on-one university environment proved to be right for me. I also passed on playing basketball to concentrate on my studies – I did DJ for a while [smiling]; not many people were listening.

You had a significant scholarship, I’m sure that made things easier.

Of course. But many people don’t realize the financial burdens that remain even with a scholarship. During the summers I worked at McDonalds and at the Naval Station, which resulted in a scholarship that helped me buy a computer for school.

After graduating from St. Mary’s with a major in History and a minor in International Studies you came back and got your job in investment banking?

No. I moved back to Chicago after college and worked in real estate for a year. I ended up going back to Minneapolis, at the time thinking I was going to law school. That’s when I changed course, met with Piper | Sandler and took the job in the equity research department here in Chicago. I love it, I even have a fabulous mentor.

Lots of twists and turns on the road to what appears to be great success.

For sure. People define success in many ways. To me, overcoming obstacles and adversity is the real definition of success. My mom landed on her feet at AbbVie , we’re proud of each other. I’m going to get my Masters. Now, when the family gets together it’s good. I wouldn’t want to go through it again…except for Cristo Rey, maybe in the new building!