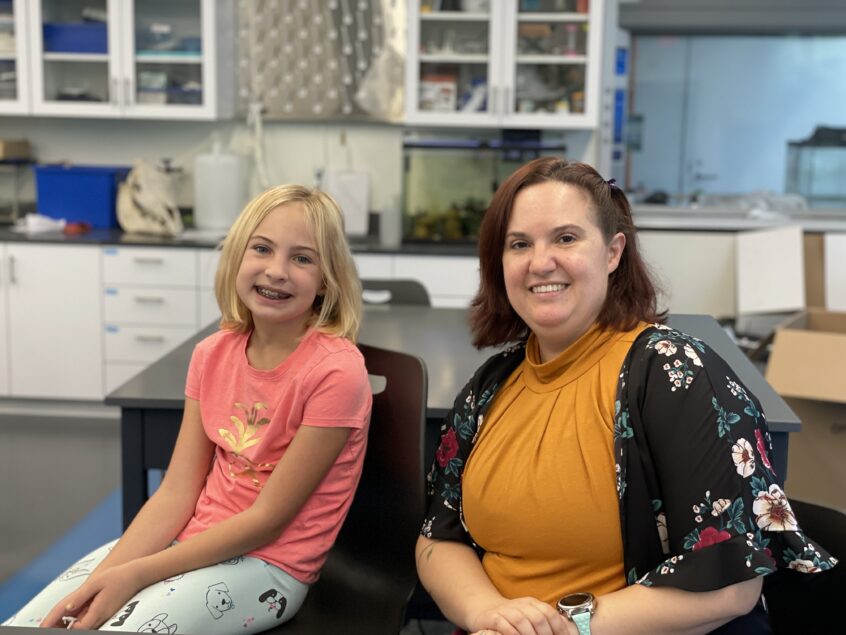 It was a tough year in education for everyone. Little in-class time and so many Zoom rooms. But try running a drama club on Chrome books.

The good news: The CRSM thespians are back, 65 students strong — bigger and better than ever. Two afternoons a week, they’re busy rehearsing, directing, building stage sets, designing costumes, and creating a publicity plan for the March 3, 4, 5 and 6, 2022, performance of Dracula, their sixth drama and first on CRSM’s new stage.

“It’s my freedom,” says Sofia, a junior, a member of the stage crew. “The drama club is a safe place where all of us can be creative and express our true selves.”

Alyssa, a sophomore and producer for the play says, “I was super quiet when I was a freshman and never would have put myself out there. But Mrs. P encouraged me and now I am so happy and loving this.”

Amid a tough year, Elizabeth Partenach, English and theater teacher, had a front row seat to the highs and lows of the extraordinary year of schooling in a pandemic. Though those challenges took a toll on many educators, she kept her students motivated and the hope for a vital theatrical troupe alive with her tenacity, charm, and commitment.

Operating from a hybrid schedule of at-home virtual learning and distanced learning in the classroom, she was dogged in her determination not to lose momentum for CRSM’s arts and humanities endeavors. A mom of two, she often had a co-creator at her side, eight-year-old daughter Gloria. Gloria, who was doing her own second grade remote learning, often commuted to CRSM with her mom and became an honorary part of the student body attending gym classes, physics and shadowing her mom. (Pictured above.)

She worked hard to keep her students emotionally connected and engaged in learning.

Partenach is passionate about the potential of theater to transform student’s lives.

“There are some students who were very shy and scared when they were freshman, but the drama club welcomed them into the fold,” she says. “Here they find camaraderie, and great support creating something together. You can physically feel the energy of them growing and discovering their own unique talents and gifts.”

“The play and the club are giving students the chance to express things they might not get to express. It shows them that there is something bigger and that they are valued and celebrated.”