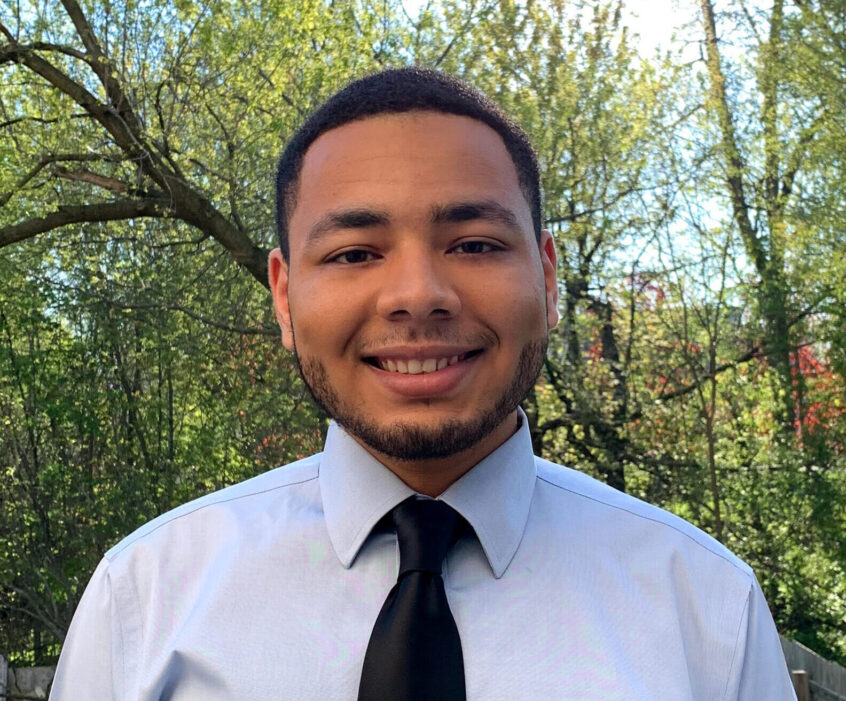 Josh graduated from CRSM in 2017. I spoke with him just after he received his degree in Theoretical Physics and Applied Mathematics from Loyola University. Josh is a study in humility and competence. His record of achievement is remarkable given his young age – and there is much more to come.

Thanks so much for making time for me, I hear you’re getting ready to travel. Getting some rest after graduation?
Yes, I’m heading down to Florida for a short vacation. I have a little time before I start my new job.

Wow, a new job already. Where will you be working?
Discover Financial has offered me a position. I’m very excited, I received an offer quickly after my interview. This would not have happened without Ms. Hocter ( Director, Alumni Career Support), she found the opportunity and supported me through the whole process. It’s two-year rotational program, Business & Finance and then Data Analytics. I’ve been learning new software programs like Tableau and a few others that I may need.

I know you did well at CRSM, a 3.9 GPA, and received a full scholarship to Loyola University. But you were in a new environment – in a challenging major. How was the transition to college?
It was difficult. The academic workload was intense. I had to take Biology, Calculus and Physics in my first semester. The fact is, Loyola University is a predominantly white institution, and I wasn’t used to that. But a few things made my adjustment easier. The Corporate Work Study taught me how to change and adapt to new situations, to not feel intimidated, and to learn as you go. And spending time with the Cristo Rey Scholars community gave me an avenue to reach out and meet new people.

That is impressive, keeping so many things going in the right direction. What’s your secret?
[laughing] Well, I think my mother set an example of working hard for what you want. Her path to citizenship was long and difficult. She had to find a job, learn the language and raise kids as a single mom.
She had to come home late from work, so I took on a father role with my siblings. I had to make sure that dinner was on the table, and they had done their homework properly. I felt I had to set an example with good grades.

She sounds like an impressive woman.
That’s only part of the story. Because she got so much help from the government when she was struggling, she wanted to give back. So, she began working with residents and immigrants, helping them with their language skills, navigating the pathway to citizenship and guiding them toward available resources. Eventually she worked with a company that became part of Catholic Charities.

You came to Cristo Rey St. Martin after public grammar school and had to jump into a work environment.
I wanted to go to Waukegan High School with my friends, but my mother insisted on CRSM. She wasn’t wrong. [laughing] I really liked Work Study. I liked dressing like a professional.

Did working in a corporate environment come easy to you.
Not really, not at first. I worked all four years at Takeda Pharmaceutical. We were the first group that worked there. I was really nervous, especially when I walked into that huge office building on my first day. But I learned a lot. I learned how to speak clearly and how to develop professional skills.

Work Study and Academics were strong for you. Were you involved in other activities?
I really liked volunteering with Campus Ministry. I volunteered quite a bit with Northern Illinois Food Bank and PADS. I was in Student Council, and I was a Student Ambassador. I was in EcoClub. I’ve always loved deriving answers in math, coming to the right answer by myself. I participated in the Ignatian Trips to Washington, DC with both CRSM and Loyola University. Those trips were really important.

Thanks for spending the time with me. Is there a lesson or strategy that has become important to you as you experience successes in your life?
I would say that it’s good to be uncomfortable. Reach out and grow. Keep in touch with your faith and friends and families; but we live in a society where we can’t stay only with the friends or the positions that we currently have. Take advantage of opportunities as they present themselves, because if we don’t, we become sedentary.