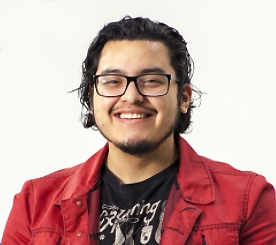 Marco graduated from CRSM in 2012. Immediately after graduation he went to art school, studying animation graphics. He now works for a production studio in Chicago as a motion graphics artist. He has a unique and positive attitude about art and creativity – one that’s been a driving influence in his life for as long as he can remember.

I’m interested in your college decision. Was it a difficult one?
Somewhat. Financially it was tough. I applied to various schools that offered animation and motion graphics programs; DePaul, Columbia, and the University of Illinois were on my list. My counselors at CRSM helped me make the right decision – the Illinois Institute had a good reputation and offered me the most attractive financial plan, so that’s where I landed.

You were lucky to finish your Bachelor’s before the school closed in 2018.
Yes. It turned out well for me. I benefitted from the excellent curricula they offered in animation. They also recommended me for a position at a very successful production house.  When I started at The Institute, I wanted to be in their games program. But they had strict GPA guidelines for freshmen entry into the program, which I couldn’t quite meet. It was suggested I start in animation and then transfer into the Games Program. I never transferred – I liked animation so much.

You mentioned your family moved quite a bit, taking care of sick relatives. How did you end up at CRSM?
It’s kind of a funny story. I didn’t know about CRSM.
When I was in middle school, I managed to get along with the class bully. He kept talking about “a school that would pay you to go to high school.” Now, I knew this couldn’t be true [laughing]. And obviously, he had the whole story wrong. But it piqued my interest, so my mom and I checked it out. After talking with Ms. Cuesta, I was interested – and my mom was convinced.

So it worked out well.
Well, I really disliked it at first. I was going through a lot at the time. My dad had passed away before I started at CRSM. Mom was working 4 jobs. The expectations and requirements at CRSM were tough for me. I was constantly being told what to do. You have to go to work. You have to wear a tie. Wear dress clothes. Tuck in your shirt. Teachers were always asking more of you than at other schools. I was confused and didn’t know what I wanted to do. I was very rebellious – a troubled kid. And now that we’re talking about it, I wonder how any of the people at CRSM had any patience with me.

So what turned it around for you?
I ended up getting fired from my work study job. So I was placed in CRSM’s IT Department. I was working with another student who had been let go. He just didn’t see anything wrong with what we had done. I would watch and listen to him, and soon began to realize…that’s how I look. And I did not like it.
Meanwhile, the man running the IT Department was constantly asking me what I wanted to do. He kept putting me in positions to help other teachers with their tech problems. Then those teachers would take an interest in me. They really cared. With all that, I began to realize that I was running out of chances – that I couldn’t waste this opportunity. I started thinking, maybe there was something I could pursue, I started wanting to go to college. My grades improved steadily from then on and work study went really well.

And then you became interested in art?
I was always interested in art because of my dad. He was not a trained artist, but he painted many portraits and landscapes. I watched what he was doing. When I was able to take an occasional art class, I would wish that it was longer. My peers always encouraged my art work. I liked creating art that impacts other people. Even when I was little – I began drawing on the walls in our house. Instead of punishing me, my dad bought me art supplies.

You were rebellious and early into graffitti art!
[laughs] I guess so! It’s the cookie cutter thing…if everybody’s doing it, if it’s been done already, why do it? I compare it to jars. You don’t want to be put in one jar, where the cap gets closed and you can’t do anything else. I never wanted that. Artists want to overflow from that jar and keep on filling other jars – experimenting and seeing new things.

You’ve been at your current job for three years, it looks like you’re doing new things all the time.
At XVP Studios it’s always something new, it’s always a challenge. I know that art or animation is not for everyone, but CRSM is responsible for a confused kid believing that he could go to college and have a career using his interest and talents.