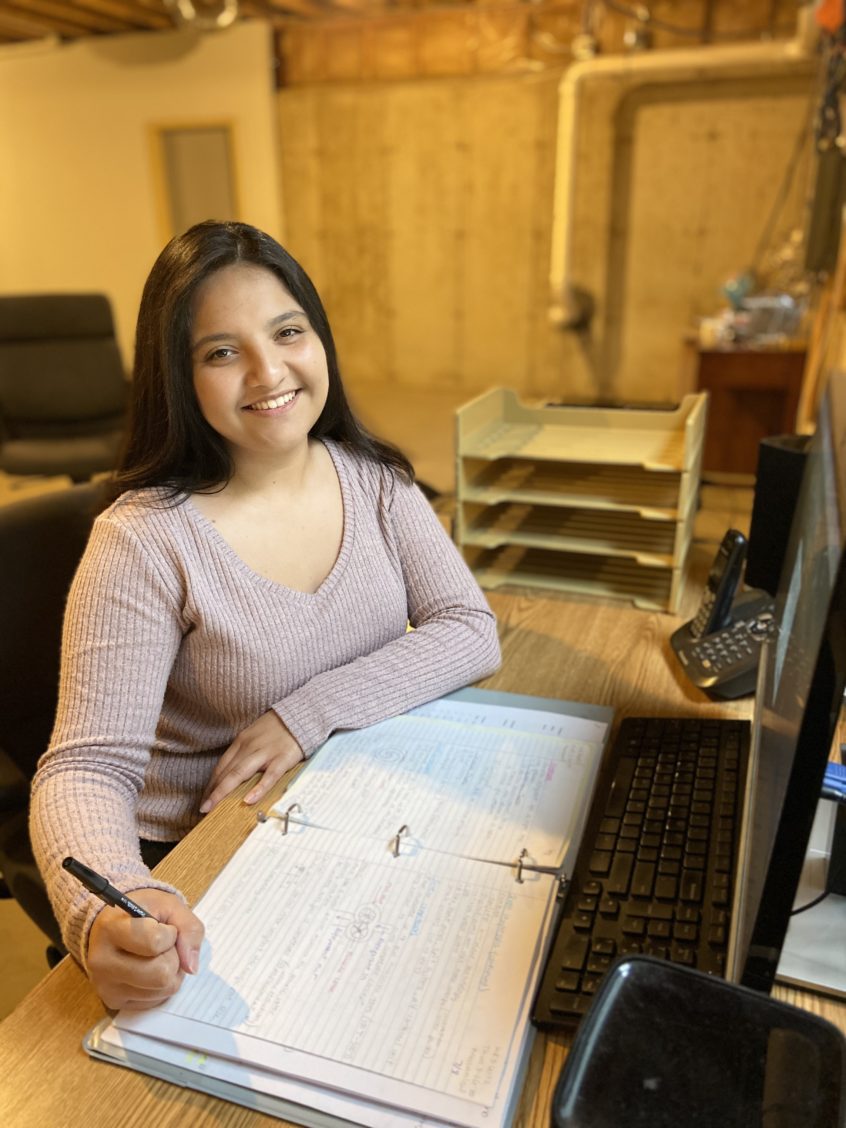 Laura (CRSM ’13, MSOE ‘21) and I first spoke while she was in the middle of her family’s move to a new residence and as she was starting her e-classes at Milwaukee School of Engineering. Like most students across the country, she is adjusting to the tectonic shifts occurring across the academic landscape. She spoke eloquently about the challenges she has faced as a Hispanic woman in a field traditionally dominated by men.

Thanks for taking the time to speak with me – these are unprecedented times for all of us. It sounds like things are going well.
You’re welcome. I’m always happy to talk about CRSM. Things are going well at MSOE (Milwaukee School of Engineering), and at home. There are six of us settling in at our new home.

Are there are more Pizanos in CRSM’s future?
Oh yes. I have a younger sister on the way. There have been lots of us at CRSM – brothers, sisters, cousins. Let’s see, if I count correctly we’re at about…15 or 16. Mr. Odiotti remarked that it seems like every time a Pizano graduates, another one starts.

It’s a dynasty! And, having graduated from our old building in 2013, you’ll be out with a bachelors in engineering in 2021.
Well, maybe. I’m thinking about going directly for a Masters of Engineering. That will delay things a bit.

I’d like to go back for a moment, I’m interested in your time in Waukegan, you were raised there, I assume you went to public elementary school?
I did. But in our family, it was always understood that we would go to CRSM and consider college.

Your grades were excellent at CRSM, and you were a member of the National Honor Society. Were you involved in a lot of activities outside of academics?
I was a Student Ambassador, and I really enjoyed being involved with the activities that Campus Ministry offered. I led many of the prayer services. I led several of our retreats. I worked with PADS, The Food Bank, UMMA and Feed My Starving Children. I’m proud to have been part of a group at CRSM that started UKNIGHTED. (a student run immigration reform organization). We did fundraising to fill duffel bags with the basics for detainees who were released into extreme weather with whatever they had on.

I’ve found that some CRSM graduates find the adjustment to college challenging. What was your experience like?
For me, it was not so much the academics as it was the cultural adjustment. I was used to a heavy work load at CRSM. But when I left CRSM, most of my friends were girls.  I was not prepared to enter a predominantly white, male environment as a Hispanic woman. That was difficult. In one of my first architectural classes I was the only girl in a classroom of fifteen.

And one of the only Hispanic people as well. That would be really daunting. Did you find resistance because of your heritage?
Sure. Someone once asked me if Mexico had electricity. [laughing]  I told them a little bit, but we mostly use fire. But seriously, I have come to the conclusion that it really is more of an experience related issue. Most of my classmates have had no multi-cultural experience.

At the risk of being a “stereotyper”, engineering students can often be quiet and reserved.
[laughing] It’s often true. My point is that they might look “stuck-up”, but they just aren’t sure what to say – just like I didn’t know how to act. It’s much easier to be comfortable around people who have had similar struggles as yourself. Maybe it’s immigration issues. Maybe it’s financial – lower income kids had an easier time reaching out to me.
But I’m lucky that way – I am outgoing, and that has really helped. I joined the Society of Hispanic Professional Engineers (SHPE). and I’m part of the school’s Diversity Council that’s gearing up to help all of the different ethnic groups on campus.

Speaking of that, I heard you were recently out of country.
Yes, I went to Panama with MSOE. We got back on February 28th. I was with the Water Brigade. We helped install a potable water system and a septic system. This summer I’ll be interning in Chicago as a junior engineer with RTM Engineering, a mechanical contractor.

It seems to me that you are going to be a member of a relatively small club – Hispanic females with a Masters in Architectural Engineering. Can you offer any advise to other people who may be encountering “traditional” barriers?
I would say this; you absolutely have to push yourself out of your comfort zone. If a person doesn’t reach out to you, you might have to do the reaching. You might get turned down. You will get turned down. You must keep an open mind to succeed.