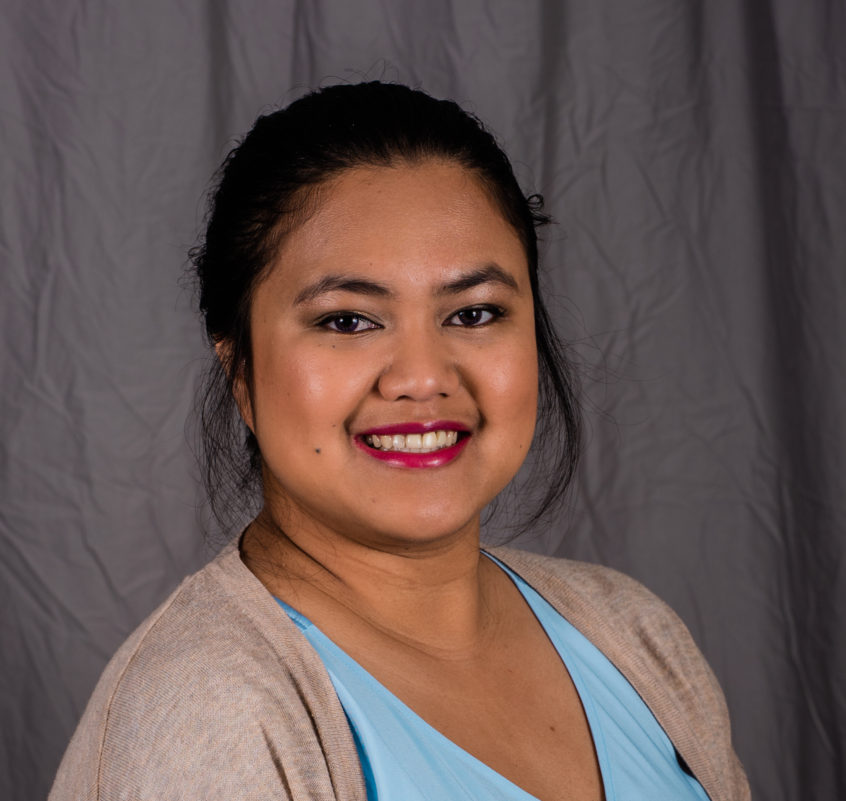 As a Biochem Quality Technician in Abbott Lab’s Diagnostic Division, Brigitte Calma Layug (CRSM ’12, Knox College ’16) has been chasing her dreams since she arrived in the US from the Philippines. Her accomplishments are impressive – and wide ranging. From Division 3 volleyball to Biology to languages to rap music, Brigitte is still moving at a remarkable pace. We caught up with her to talk about her life and dreams.  The following conversation has been edited and condensed.

Thanks for meeting, you have quite the schedule with a young family and responsibilities at Abbott. I’m not sure how you do it!

Oh, it’s no problem. If I hadn’t gone to CRSM my life would be different…and not in a better way. That’s why I always try to make time for Cristo Rey St. Martin when I’m asked.

Knox College, a major in Chemistry with minors in Biology and Spanish…was that always your goal?

Not really. At CRSM I realized I had a talent in the sciences; my first thought was to go into engineering. My father is in construction in Guam and I was thinking about a possible partnership with him. Knox College has a 5 year engineering program which was one of the reasons I landed there. It’s a diverse campus which I liked, and I was lucky, they offered me scholarship money – so I accepted.

I reported to Knox early for volleyball, and I made friends on the team, but it wasn’t long before I found myself in a chemistry class, and that was it – like my soul mate. I left the team after my freshman year to pursue my passion. It also afforded me the chance to study in Barcelona.

You were born in the Philippines and arrived here as a Sophomore. Your English is perfect. Was it a difficult transition?

Thanks. It wasn’t easy at first; my English wasn’t great because we didn’t speak it at home. So, as a fourteen-year-old from the Philippines, classes at CRSM were somewhat challenging. But playing on the volleyball team for Ms. Ferrer, and having Ms. Eby in English class improved my language skills and made my transition much easier. I’m fluent in Tagalog; I try to speak it at home with my daughter. And because of my time in Barcelona, I’m almost there in Spanish.

You mentioned that you were the first in your family to go to college, was your family 100% behind you to make it happen?

It was complicated. There were people in my family that were opposed to my going to Knox for engineering. There was a lot of pressure to stay local and go to nursing school, mainly because jobs in nursing were so plentiful. But that was not me, and that was not what I wanted to do. So as time went on, and the pressure became more intense, I had to scale back my contact with all the negativity and concentrate on the positive influences in my life. My mother’s support was just as intense, maybe more so – follow your dream, follow your dream, follow your dream. She’s a superwoman, her support was critical.

Was there a time when you doubted yourself and the decision you made?

Junior year is often the toughest time in Chemistry. I thought about quitting when it got tough, but it quickly occurred to me that, “I’m here, I’m the first to go to college. If I stop now, everything I fought for will go to waste.”  So thanks to my mom and her family, their support was my inspiration – I got through it. And on another positive note, now that I have my degree and work at Abbott, I’m on better terms with the family members that were not as supportive as they could have been.

Looking forward, where do you see yourself in…5 years?  Did I hear you write rap music?

I do write some music. We have great fun; working with friends to do recordings is very fulfilling. I plan on staying at Abbott Labs – I love it here. I’m a BioChem quality tech right now; down the road I would like to do more experimental chemistry. I’m becoming more involved as the co-chair for an Abbott outreach program that the Asian Leadership & Cultural Network leads. Long term, when my daughter is a bit older, an advanced degree may be in my future.

Any advice for CRSM students that are encountering obstacles?