Give the gift of education. Through a mission-driven education, we can build a more equitable society by removing barriers, decreasing economic inequality and advancing racial equity for our students and their families.

This holiday season give gifts with meaning; ones that offer hope, purpose, strength and support to our students, while also celebrating someone special in your life. Use the attached gift tag to inform your family, friends, and colleagues about the gifts you made in their honor.

Celebrate this holiday season with joy, love, goodwill...and most of all HOPE!

Your Gifts at work... 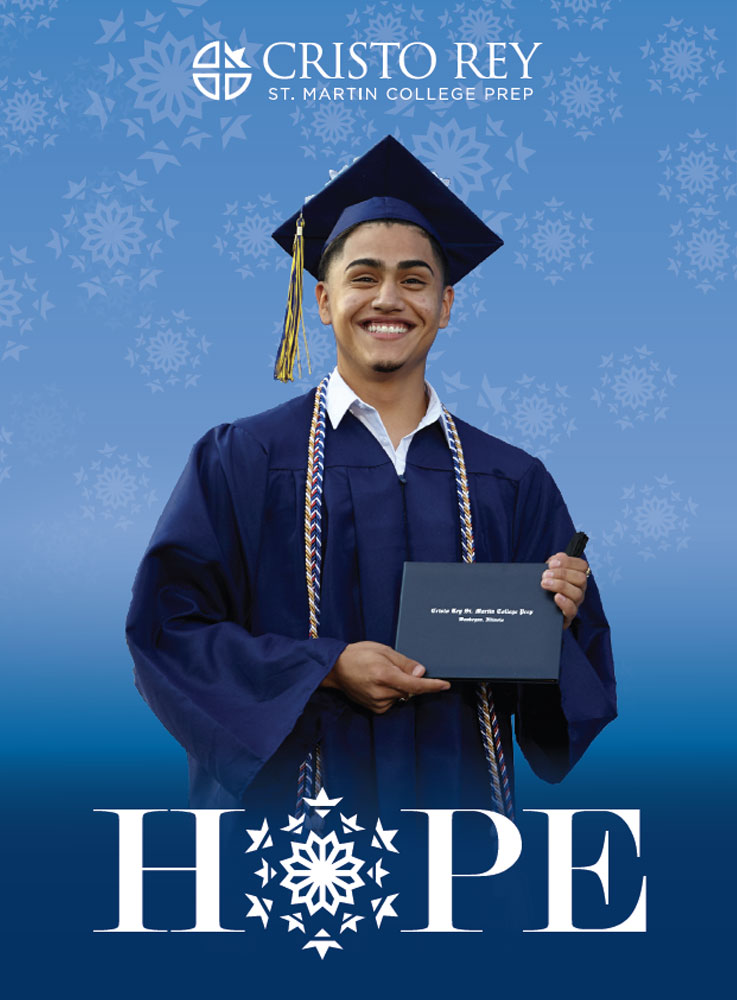 Nick Marquez, CRSM class of 2020, grew up in Waukegan IL with his mother, father and two brothers. But it was his grandmother, who emigrated from Mexico to the south side of Chicago at the age of 11, that motivated him to always do his best. “Time is the most valuable thing in life,” she told him. It wasn’t until his grandma became seriously ill his sophomore year at CRSM, that Nick understood how very true that was. Nick realized he wanted his life to have purpose and to make his grandma and parents proud.

And so, he is charting his future. While attending CRSM Nick excelled academically, in his work study assignments at Lake County States Attorney’s Office, Snap-On Credit and AbbVie and in all his extra-curricular activities, including participating in the Mock Trial competition in downtown Chicago.

Nick is now in the honors program at the University of Illinois, Springfield and is the first in his family to attend college. Nick’s grandma passed away during his senior year at CRSM, and yet her influence is ever-present. Nick intends to attend law school after he graduates and hopes to one day sit on the Supreme Court of the United States. Now that’s having purpose!

GIFTS OF JOY
$25 Skillsoft Online Learning Center for One Student
Our Corporate Work Study Program depends on students bringing value to our business partners. Applied Educational Systems provides tailored, on-line training and assessment essential for their success. With this gift you will equip a student with the professional skills they need to be productive now and beyond college.

GIFTS FOR A BRIGHT FUTURE
$50 College Planning Software and Career Assessment for 10 Students
Our mission is to get students to and through college. The Naviance Readiness Solution is a comprehensive toolset that helps us assess and develop essential competencies critical for college, career and life.

GIFTS OF LOVE
$100 for Books for One Student
Your gift will be used to purchase textbooks for one student for the year. While typical high​ schools charge an annual fee for books, CRSM does not because of our commitment to ease the financial burden for low-income families.

GIFTS OF HOPE
$300 for a Chromebook
Each student receives a Chromebook when they begin their journey at CRSM. The pandemic forced CRSM into remote learning, making Chromebooks, e-learning content and internet access mission critical.

GIFTS OF HEALTH
$500 Counseling and Nursing Services for One Student
The COVID 19 pandemic has made our counselors’ and nurses’ work more important than ever. They are working long hours dealing with the health and emotional challenges our students and their families are now facing.

GIFTS OF GOODWILL
$1,000 Provides Tuition Assistance for One Student
Though our students earn tuition through work study, families are also required to pay a portion of tuition. Your donation would provide financial assistance for a student and their family struggling with the financial hardship caused by the pandemic.

$5,000 Share Your Blessings
Make a difference in the lives of deserving young men and women, while celebrating an important day in your life or that of a loved one. As an Adopt A Day Sponsor your gift will provide a quality education to students who otherwise could not afford it. You will be giving our students, their families and this community, hope for a better tomorrow.