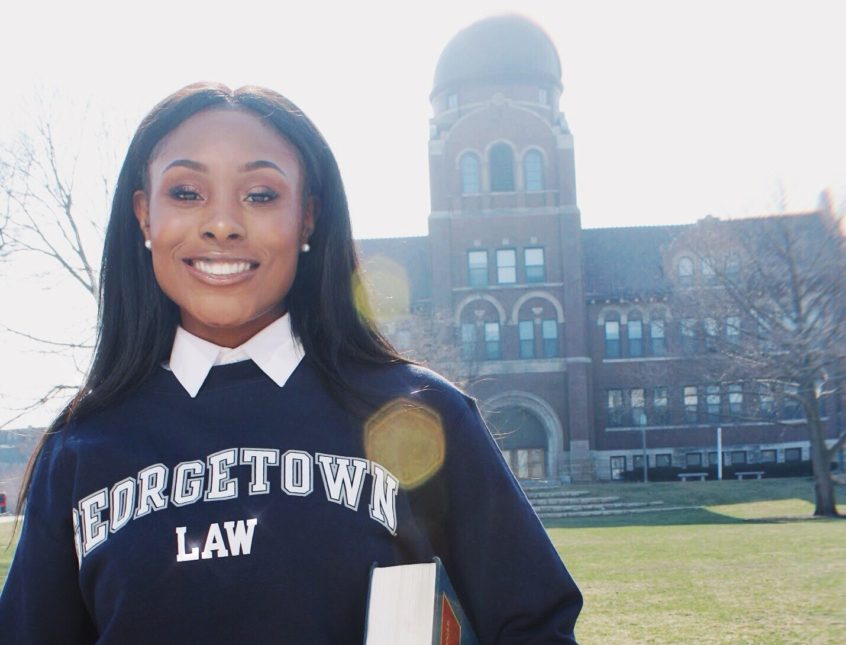 Good to see you again. Congratulations on your acceptance at Georgetown. Last time we met you were at a Cristo Rey Day of Service at Discover Financial Services.

Yes. That was a great event. Discover and Cristo Rey do wonderful things together. They certainly have been special for me.

How did the relationship with Discover come about? I thought your work study experience was at the YWCA and The United Way.

That’s correct, I worked at both. My time at United Way was particularly interesting and challenging. They wrote letters of recommendation for me that were so nice. I’m still in touch with some of the people I met there.

My experience at Discover was more of a coincidence. I was speaking with President Kendall at an alumni function and mentioned to him that I was interested in a career in law and was looking for a summer internship. Before I knew it I was in contact with Discover’s legal department and eventually doing two internships with them. It would be difficult to overstate how important CRSM and Discover have been in my life.

It’s been so long; I don’t even remember. I was very young, I was constantly watching Law & Order, Special Victims Unit, Forensic Files – any program about lawyers. I was fascinated – driving my parents crazy.

That TV time doesn’t seem to have gotten in the way of your studies, you were offered a full scholarship through the Loyola University Cristo Rey Scholars Program.

My mom is a hard worker and my dad was a bit of an entrepreneur – they made it clear to us that we weren’t allowed to bring home anything less than an “A”. After a while I guess I just internalized those “A” goals.

Not exactly. During the summer after my Junior year at CRSM I did a three week study program at Georgetown. I fell in love with it and immediately decided I was going there for college. But it didn’t turn out that way. I wasn’t accepted. I was really discouraged. I lost interest in choosing a school. Luckily, the counselors at CRSM were there for me as I regained my self-confidence; and I won the Loyola University Cristo Rey Scholarship.

Looking back as a graduate from CRSM and Loyola University, what do you see?

I see that very often things happen for a reason. The first year at both CRSM and Loyola were not that great; but both schools turned out to be the best thing that could have happened to me. Year one at Cristo Rey was a tough transition for me – going from public school to private. Yet, if I hadn’t gone to CRSM, I wouldn’t have had my work experience. I wouldn’t have had the opportunity to work at Discover Financial Services. I wouldn’t be graduating from Loyola as a Cristo Rey Scholar, and I would have missed the volunteer experience that CRSM offers; I wouldn’t have worked at PADS. I might not have learned how much I enjoy giving back.

Similarly, my first year at Loyola U. was rough. I was nervous about getting it right. I was mismatched with my roommate. Making friends was difficult because I was studying so hard. I spent most of my time in the library – I sometimes slept there. But if I hadn’t gone to Loyola, I wouldn’t have studied in Rome. I wouldn’t have met new and interesting people in a marketplace in Morocco. I wouldn’t be working at Loyola’s law library, meeting professors and getting advice from 1st year law students on how to prepare. And I wouldn’t be changing the minds of kids who don’t believe they can go to college at the Metro Achievement Center for Girls.

That really is a happy set of similarities. Is there a takeaway you might share with a young CRSM student?

I would say this: there are going to be times of transition that are uncomfortable; stick it out and pay attention. I guarantee you that there will be opportunities staring you in the face. I was the only one in my group that followed up on the posting for the Sidley Prelaw Scholars Program. And volunteer after you leave Cristo Rey. Aside from the positive effect you will have on the world, there is no way to estimate the benefits you will receive.