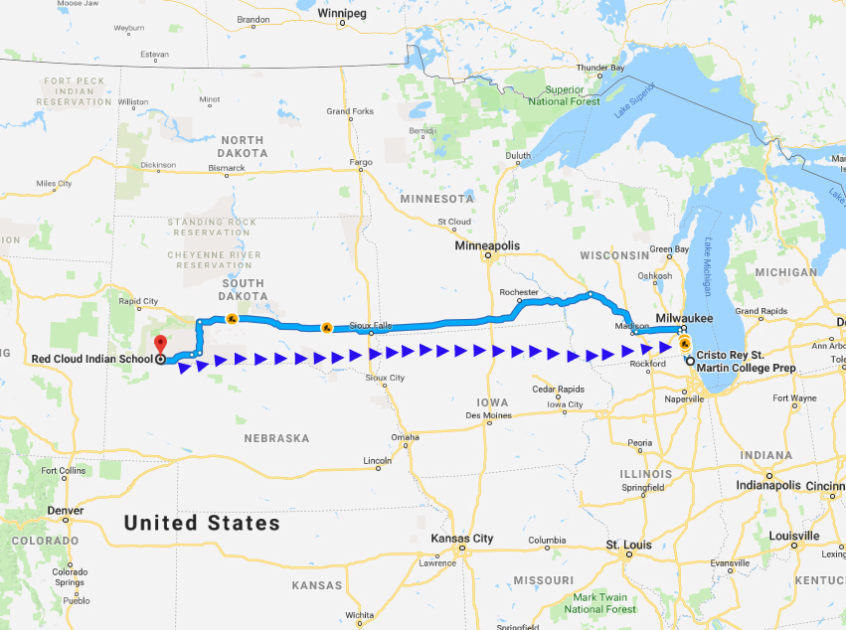 This exchange program, which is in its third year, not only allows Cristo Rey students to become ambassadors of their cultures and communities here in Waukegan, but offers an opportunity to become teacher and observer – fostering new friendships and cultural understanding between students from far-flung communities. CRSM students will soon travel to South Dakota to learn about the Lakota culture and contemporary life on the reservation.

Jim Dippold (Director of Campus Ministry) capsulized the value of the program;

“Faith and Justice issues, struggles and successes are cast in high relief above the background of a culture that is different from our own. This type of shared experience can also serve as an effective preparation for the culture shock that many college freshmen face.”

Despite the tough winter travel from the Pine Ridge Reservation, the RCHS students participated in a dizzying array of scheduled activities. Their first full day included an early breakfast, Mass at La Segrada Familia, a tour and art project at the National Museum of Mexican Art, sightseeing in downtown Chicago and lunch at Giordano’s.

Monday morning classes at CRSM were treated to Red Cloud student “shadows”, and a special Spanish /Lakota language class. Mano a Mano led stories of immigration with parents and students. At day’s end, RCHS students left school to have a family dinner at students’ homes.

Jazmin and Cindy, alums currently studying at Beloit College who helped supervise and organize the program talked about their favorite experience noted the language class. Asked about some Lakota words they remember, both said; mitakuye oyasin which translates to: we are all related, and unci, (pronounced: oon-chee) which means grandmother.

Tuesday and Wednesday were just as busy.  On Tuesday help was needed at the Northern Illinois Food Bank; the day wrapped up at CRSM with an evening celebration of food and dance – La Noche de Orgullo Hispano including a performance by Ballet Folklorico Erandi.

Ash Wednesday brought the school together for a morning Taize Prayer Service. The group spent time at Lake Michigan and visited Don Chuy’s ice cream, a local business started by an alum of CRSM.  After dinner together in the Waukegan community the group gathered one last time for a shared reflection on the week.

The RCHS students made it back safe and sound to their homes in South Dakota and continued their plans to receive their new CRSM friends from Waukegan, IL on March 23.

Part 2 of the exchange took place this past week, as the CRSM students journeyed to South Dakota.  Here are some photos from this week’s trip: