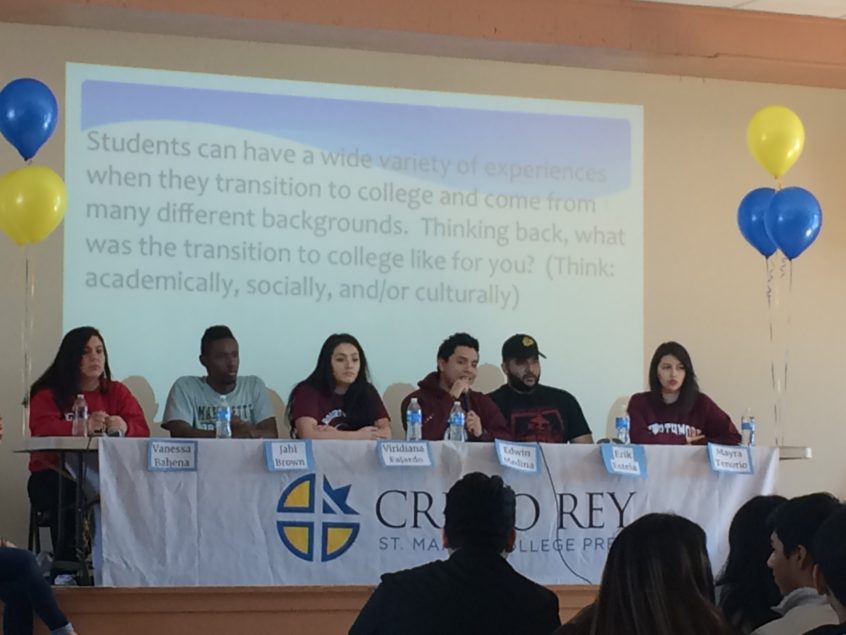 With the goal to support students to and through college, exploring the experiences of alumni who are navigating their journeys toward long-term success is an important link between CRSM and what lies ahead after graduation.

Recently, a handful of CRSM alumni came back to spend an afternoon with seniors, serving as mentors sharing their own experiences in college and the work world, and encouraging students to pursue their goals and dreams – even though the challenges ahead will be real.

Success, the alumni agreed, is (more than anything else) about overcoming the “culture shock” between high school and college.

“The most shocking part of college to me was confronting the fact that other students who aren’t Latina see life with a whole different lens than we may see it, “said alumna Mayra Tenorio, who graduated from Swarthmore College on the East Coast. “How you handle this will be very important. The biggest lesson I learned was to stand your ground and defend yourself and what you believe in. Cristo Rey gave me the strength to meet that challenge.”

Erik Estela said he found many of the same challenges and told the students: “Even when you face issues of racism, which is real, directly or indirectly, wherever you go don’t forget you have value as a human being.”

Time management, and “being patient with our parents who don’t fully understand that the world of college is for us,” are also important during the transition from high school to college, said alumna Viridiana “Vivian” Fajardo. “As the oldest of five and the first one in my family to ever attend college, this was very important for me to try to help my parents understand that education is something we need in order to be successful. Now my sisters are in college and they are very supportive.”

Learning to handle the freedom of being on your own at college also can be a big adjustment, agreed all of the alumni who served on the panel.

“I had a real tough time trying to keep my GPA up,” said Jahi Brown, who recently graduated from Marquette. “I ended up on probation, but my message to you is to reach out for help in college if you are struggling and never give up.”

Alumni who served on the panel included: