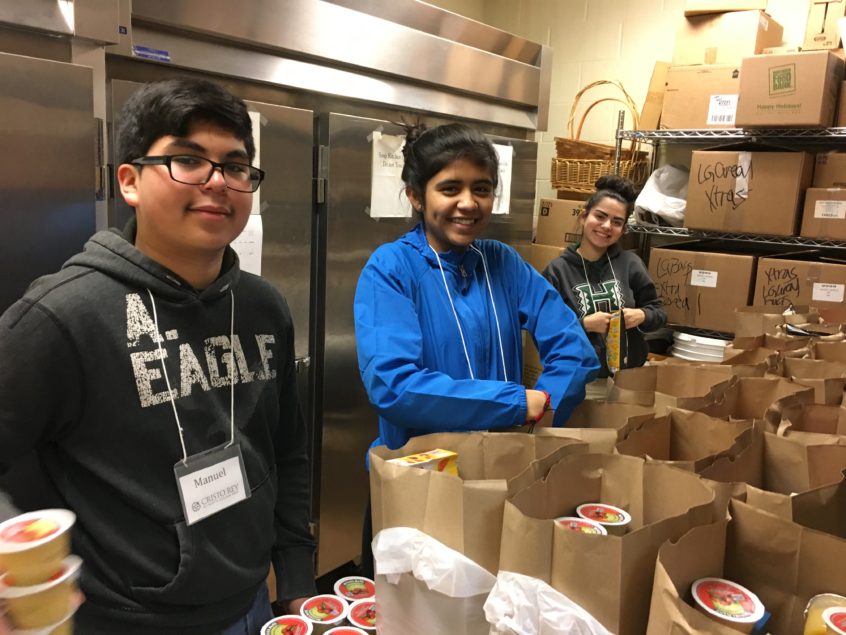 Manny A., a freshman at CRSM, spends about two-to-three nights after school each week packing lunches, making beds, reading to younger children and serving up kindness to those who need it most.

In his first four months of high school, he has accumulated 38 service hours volunteering at PADS Lake County, Roberti Community House, the Northern Illinois Food Bank and traveling in the wee hours of the morning to pray for immigrant detainees who are being deported.

The 14-year-old says helping others is the best way to leave everyone smiling.

Manny’s commitment to service speaks volumes about the heart of many CRSM students whose enthusiasm for helping others and giving back to the community has resulted in 1040 volunteer hours this semester. That’s 65 hours each week since September.

Mobilizing to care where it is needed most, some students, like Manny, and Cassy L., a senior at CRSM, volunteer several nights a week. Cassie recently hit three nights in a row when she volunteered at the Northfield Township food pantry, the next night at the food bank and earlier in the week at Saint Anastasia’s soup kitchen. She’s also a regular volunteer at Feed My Starving Children in Libertyville.

“I like connecting with people, especially the little children and knowing that they may not have someone to listen to them, but I can be that person,” says Manny. He works at Takeda for his work-study job. “I like doing things like this where you aren’t doing it to get a prize or be the best. You’re just doing it to help someone who needs you.”

Manny says his inspiration comes from his mom, who is raising him and his three younger siblings by herself.

“My mom gives so much to all of us,” says Manny. “This is my way of giving that back to others.”

The only challenge to this heavy volunteer schedule? Late nights doing homework, he says on school nights when he is volunteering, he doesn’t get home until about 9 p.m.

“I didn’t realize when I came to Cristo Rey that this would be something we can do, and now I love the school because we do get the chance to help others,” he says.

Unlike many high schools where service hours are a graduation requirement, at CRSM students are not required to perform service hours.

Just before Thanksgiving, almost 60 CRSM students, their families and teachers and staff kicked off the giving season with a Saturday day of service. Some packed children’s books for Catholic Charities to make sure area tots find gifts from Santa under their trees. Others sorted clothing and household items for the Salvation Army.