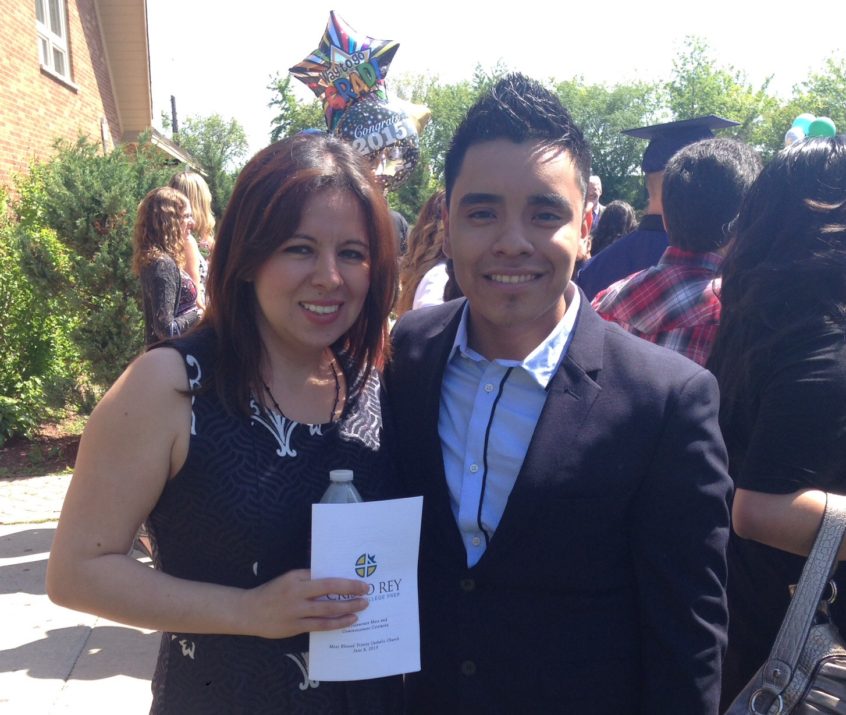 Seven years ago, Edwin Medina took his dream to become an accountant and headed to college, determined to one day return to Cristo Rey and help students and families struggling with financial challenges.

At 23, the Class of 2011 graduate is back! Armed with a degree in accounting and business administration from Robert Morris University, Medina has traded the classroom for a cubicle in the business offices of the new school. Celebrating his one year anniversary as an accountant for the school, Medina handles payroll and works closely with families helping them meet tuition challenges. His goal: to make every student successful.

“Working at CRSM is a dream job, I always wanted to help out the school that believed in me,” says Medina, who transferred to CRSM from Waukegan High School as a sophomore. At the time he says, changing schools was “a huge adjustment,” and he is very grateful for the support he received from CRSM teachers, staff and especially Mike Odiotti, principal, and assistant principal, Marlene Eby.

“To see that this school believed in me made me want to come back and help out.”

The CRSM “pay it forward” effect made its mark on him in high school.

“This might sound too perfect of a story, but when I was a senior I remember sitting with Mrs. Juarez (counselor Martha Juarez) and telling her that I wanted to be an accountant,” says Medina. “I never told her why, but I always knew that CRSM would grow and would need a finance team, and if I was lucky enough, I would be part of it.”

A few weeks before his college graduation, Medina phoned his alma mater to inquire if the accounting job he longed for and worked towards for four years, could be a reality. After speaking with Mike Odiotti, principal, he was hired four months later.

Since joining the CRSM staff in December of 2016, Medina has moved smoothly into a flourishing volunteer career as well. When his “day job” is complete, he coaches the boys’ and girls’ volleyball teams; helps with the National Hispanic Honor Society, volunteers with students at the food pantry and helps drive the bus to carry students to the Illinois immigrant detention center in Broadview to pray for immigrants who are being deported.

“Working at CRSM has been a great experience,” he says. “I’m a person that likes to give back to the people around me. I see myself a lot in some of the students that I talk to. Every time there is a family struggling with payments or come and talk to me about their financial situation, I can totally understand because at one point my family was in their shoes. “
It is his own experience that drives him to make a difference way beyond the finance department.

“I would like to help as much as I can not only in the finance department,” he says. “As a student I didn’t get to participate in a lot of the clubs or events that we had, so now as a staff member I would like to help and experience what it feels like to be part of some amazing clubs that our school offers.”

Medina is also very grateful to CRSM for the impact the community has had on his family, who he is quick to point out have a strong faith and are devout Christians. His sister Arely was a graduate of the Class of 2015 and is studying to be a dental assistant, and his younger sister, Arlene, who is in seventh grade, is already geared up to apply to CRSM next year. “It is a good feeling that my younger sisters see the importance of education,” he says. “I always remind them that they have to be better than me because they have more resources available than what I had.”

Looking to the future Medina has a goal to obtain his CPA and work as a full-time CRSM staff member. Recently, he helped buy a house for his family in North Chicago and would like to help his father start a small business. “I’ve seen the work and sacrifice that both my parents put for us three to succeed and giving back to them is one goal that I have,” he said. “Also this a fun/big dream that my sister and I have, we plan to have an animal shelter in the future and help out dogs that don’t have a home.”

The most important lesson he has learned from Cristo Rey “is to be compassionate.” He says he’s also learned: “to not think I’m better than anyone, to always remember where I came from, that hard work pays off and that education is necessary for success. Helping your peers and always putting yourself in someone else’s shoes can change the way you might behave when you face a problem.”

What advice does he have for students?

“One piece of advice that I’d like students to take away is that they need to take advantage of the new campus, the programs, events, clubs, after school activities and event sports that we have. If you don’t have a ride or you have a hard time finding people to help you out, surround yourself with students that like to participate in school. Don’t be afraid to be friends with students that like to be successful. Extracurricular activities can help you when you’re trying to apply to universities and AP classes are hard but, managing your time is key to accomplishing a lot of things. It is A MUST because college gets harder.”

He’s thrilled about the new building and how CRSM is prospering.

“I’m happy to see how CRSM keeps growing every day,” he says. “Back in 2010-2011 we heard rumors of having a new school, it was sad to think that we didn’t even have our own locker. Now as a staff member, I’m able to see that ‘rumor’ come true. It was kind of emotional to let our old campus (Grandma) go because during our last assembly, all the good memories of when I was a student came back. I’m still in shock of how many after school programs, clubs, activities we have with minimum resources. We are always looking for more help because the need is there, our students are always asking for more because of how smart and talented this generation is.”

He adds: “Just yesterday during incoming freshman interviews we were asked by eighth graders about a film and music club. Unfortunately we don’t have those yet, but the need and want is there. Overall, I’m happy and proud to say that I’m part of the CRSM community. “