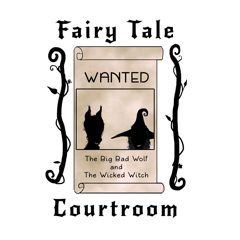 “What if?” That’s the question that teacher Elizabeth Partenach wants to move and inspire student actors and the audience of CRSM’s debut theatrical performance on March 18 and 19, 2016.

“I want this play to open up a new world, to show the students the power of their performance,” says the Academic Assistance Program English teacher who is the architect of what is hoped to be the first of a hoped for many plays at CRSM. “For a short period of time they are transforming the audience and changing what their daily life looks like.”

Putting their talent out there, CRSM students will present the comedy, Fairy Tale Courtroom, the play which puts on trial two of the biggest villains, the Big Bad Wolf and the Wicked Witch, and is based on a novel by author Dana Proulx.

For two days, the “café-gym-autorium” will be transformed into a mock trial room, thanks in large part to area businesses who are embracing the opportunity for CRSM students to spread their theatrical wings by donating most of the materials needed for construction. Donations included: Evanston Lumber donated all of the lumber for the set building; Rust-Oleum donated paint and W.W. Grainger donated power tools, safety goggles and other safety equipment for the set builders. Social studies teacher Charles Fuller is supervising the set production.

These young thespians are serious about their craft. Through challenging rehearsals, held Monday through Thursdays from 5:30 to 7:30 p.m., and the guidance of Partenach, their artist-educator, they are developing their skills in all aspects of theater. The students who aren’t stepping onto the “stage,” are working behind the scenes as the props and stage crew, costume designers, marketing team, makeup artists, and more.

The hope is that when students leave CRSM they will have had a broad range of experiences and are prepared for success in college – and maybe now, professional theater.

“We would like to see this turn into a theater club with a mini show once a quarter,” says Partenach.