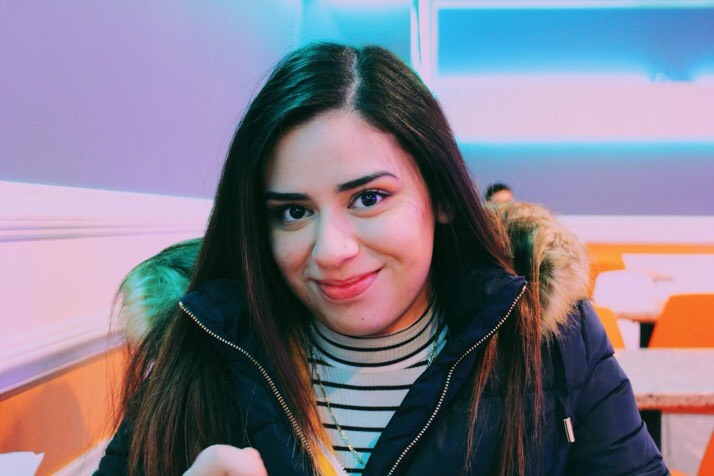 Bursting with energy and enthusiasm, Veronica Alvarez says the first three years of college have been a real thrill ride. But, not one for the timid. Her rigorous business coursework at Marion University has put her mettle to the test. The CRSM Class of 2015 graduate says it’s well worth the hard work. Now, with one year left of college, she’s already plotting her “next.” She’s determined her business career will soar.

“Up, up and even higher,” is the guiding principle she says she learned as a CRSM student. At the same time, she was honing her administration and marketing skills at Abbott and Kennedy Constructing Corporation through the Corporate Work Study Program. Since 2014, she’s worked summers on the customer service front lines at Six Flags Great America in Gurnee. She’s also volunteered with the CRSM summer work-study training for incoming freshman.

“These experiences all have prepared me to work hard, but to also give back to those who have helped get me where I am,” says Alvarez. Her twin sister, Isabel, is a CRSM graduate and currently is enrolled at the College of Lake County studying business administration. “CRSM is a big stepping stone for me going to college and giving me experience in the business world. The work-study volunteering that I do has played a huge part in inspiring me, because I get to meet so many of the business partners and learn about their experiences. This helped me decide that I want to work in corporate America. It’s also great because I hopefully am inspiring students who may see me as a mentor. It’s an incredible experience to give back to the next generation of CRSM students.

Alvarez says she is grateful for the impact CRSM teachers made in “pushing me out of my comfort zone to try things like public speaking that I never would have, and to really improve my critical thinking skills.” She’s also inspired by the hard work her parents have modeled for her and her two siblings. Her mother is a nurse for Lake County and her father a health inspector for the county.

As a CRSM student, Alvarez was a regular volunteer at Feed My Starving Children and the Northern Illinois Food Bank, a member of the environmental club, captain of the volleyball team, a member of the soccer team and a student ambassador.

“If I hadn’t attended CRSM, I most likely wouldn’t be in college like I am right now, nor would I be the person I am right now,” she says. “I wouldn’t have the same opportunities that CRSM offered me. CRSM is the reason why I pursued college.” The counselors at CRSM also helped her obtain a scholarship, which was key in allowing her to attend Marion, she says.

This summer she will return to Waukegan from Fond du Lac to work full-time at Great America as an employee scheduler and recruiter, assisting with the hiring, interview, data entry and phone/video process.

Fast forward five years, and Alvarez says she and her sister plan to explore career options in California, where the family recently reconnected to a large group of cousins on her mother’s side of the family. She and her sister are working hard to finance a move to the West Coast and creating a strategy to make that goal happen.

“Since business administration is so broad, there is incredible room for growth in my field,” she says. “When I find the right fit eventually I will work myself up the ladder which will be both challenging and rewarding.”