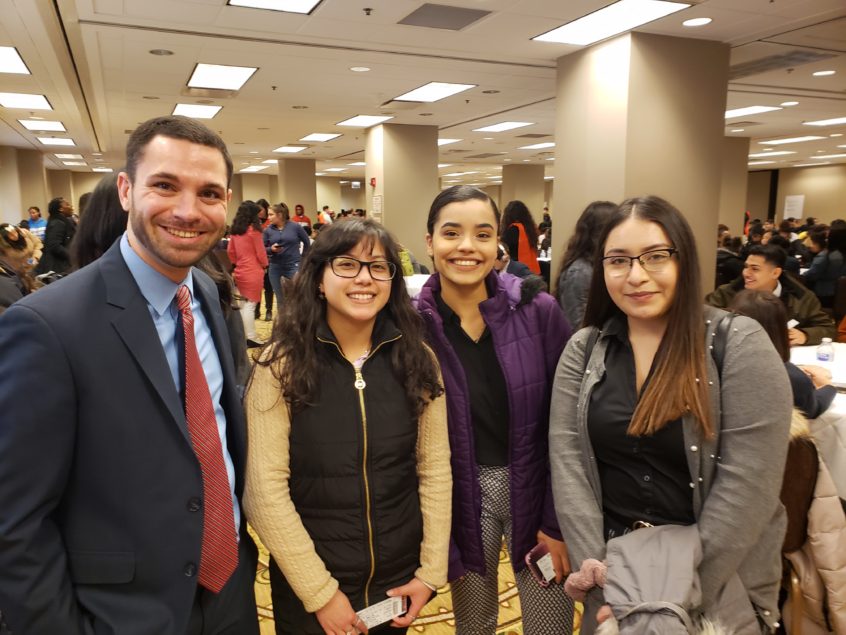 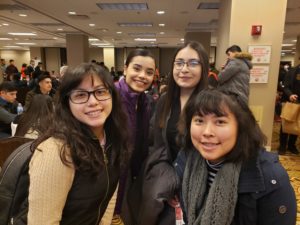 Again this year Cristo Rey St. Martin was one of a select group of Chicagoland schools invited to participate in the Hamilton Education Program – the ground breaking program which involves 6 weeks of work studying American history through a special integrated curriculum about Alexander Hamilton and the nation’s Founding Fathers. The program culminates in a matinee performance of Hamilton and a Q&A with members of the Hamilton cast.

Mr. Jon Taus (History) organized, administered and taught the curriculum that sent CRSM to the show.  “I have so much respect for what the producers of Hamilton are doing. Not only are students getting a shot to see Hamilton, they are using its words, music and staging to further their understanding and enjoyment of American History, music and drama.”

Out of the hundreds of students invited to the matinee, an original work by CRSM’s Yesenia Gonzalez ’20 was chosen as a stand-out.

As published in the  LAKE COUNTY NEWS-SUN 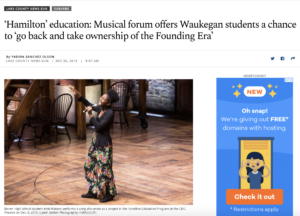 For her project, the 17-year-old senior wrote a poem about the First Lady of the United States.

Gonzalez is a first-generation American whose parents immigrated from Mexico, she said.

Her goal is to be an immigration lawyer, and she said taking part in the EduHam program and watching the play has fueled that drive.

‘That an immigrant like Hamilton can have such an impact on this nation is really inspiring to me’, Gonzalez said.”

“I am not throwing away my shot” are some of the most popular lyrics in the notable song “My Shot” written by Lin-Manuel Miranda and performed in the musical “Hamilton.”

On Wednesday at the CIBC Theatre in Chicago, 16-year-old Ariel Watson took that advice to heart and belted out a performance on stage in front of 1,900 students and teachers who are part of the Hamilton Education Program, known as EduHam.

The junior at Bloom High School in Chicago Heights said she was nervous.

To calm those nerves, Watson used a trick — she took off her glasses so she couldn’t see the crowd looking back at her as she sang about U.S. Founding Father Alexander Hamilton’s wife, Eliza.

“It was really stressful going up there,” Watson said, adding that while it was a nerve-wrecking experience, it was also “a lot of fun.”

In the audience Wednesday was James Basker, president of the New York-based Gilder Lehrman Institute of American History, which in partnership with the “Hamilton” production offers the EduHam program to selected schools.

“This is the most exciting educational program I’ve been a part of in 40 years,” Basker said. “I’ve never seen anything animate students quite like this project.”

The program’s curriculum begins with students learning about the country’s founding history and then making that history come alive through their creations in the form of monologues, raps, songs, poems and small skits that they practice and perform for their peers as their final project.

Some of those students presented that work Wednesday before they were treated to the Broadway production that has captivated the nation since it opened in 2015.

With the gritty “Hamilton” backdrop scenery, one male duo even sang the narrative in Spanish accompanied by Banda music.

Others wore costumes that they quickly had to change in and out of to carry on their performances like the professional actors do.
Wednesday’s trip was comprised of 44 Chicagoland area schools that included students from Waukegan High School and Cristo Rey St. Martin College Prep on Belvidere Road.

“It’s a terribly important time right now because of all the divisiveness and uncertainty in the country,” Basker said. “To be producing a generation who care about American history and civics and who are engaged gives me hope.”

Basker said that soon the program will be accessible nationwide.

In the fall of 2020, the Lehrman institute plans to make the EduHam curriculum available at no cost to every school in the country.

“These are kids who might not care not about history at all, and they get to go back and take ownership of the Founding Era — which maybe they just thought was a bunch of white guys in wigs,” Basker said.

For her project, the 17-year-old senior wrote a poem about the First Lady of the United States.

Gonzalez is a first-generation American whose parents immigrated from Mexico, she said.

Her goal is to be an immigration lawyer, and she said taking part in the EduHam program and watching the play has fueled that drive.

“That an immigrant like Hamilton can have such an impact on this nation is really inspiring to me,” Gonzalez said.

Waukegan High School senior Midhun Krishna said his project was a monologue on how the colonists were introduced to the Declaration of Independence.

“My teacher said it was good,” Krishna said. “It was cool, because it taught me that anybody can be a leader. You just have to step up.”

For Emma Styx, a junior at Waukegan High School, the play’s music has made her fall in love with the story of Hamilton, she said.

Styx had already seen the play earlier this year for her birthday, but she said watching it again on Wednesday gave her an appreciation for all the work it takes to mount such a production.

Before the play, some of the “Hamilton” cast members answered pre-submitted questions from students.

The actors spoke of personal sacrifices they’ve had to make for their craft and of how, for some, it took years of auditioning before they were finally cast as the historical characters they play in “Hamilton.”

Yadira Sanchez Olson is a freelance reporter for the News-Sun.