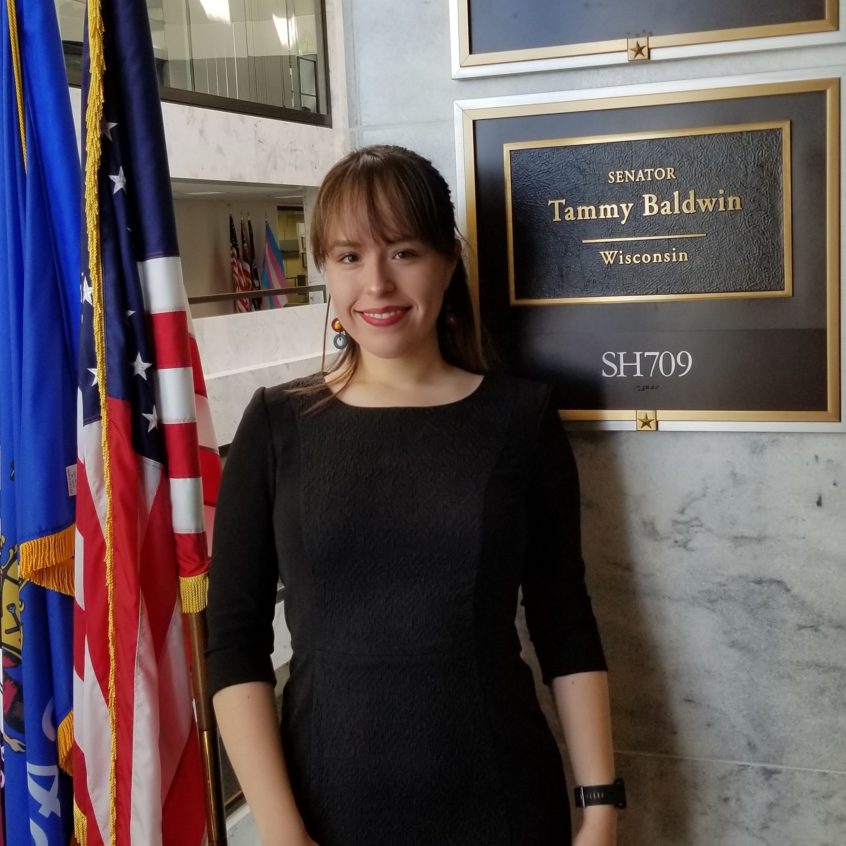 Dulce (CRSM ’16, Carthage ’19) and I met at CRSM the afternoon of the Alumni Christmas party. We spoke about her involvement with Campus Ministry’s volunteer trips, her bachelor’s thesis, early graduation from Carthage College and her aspirations in politics.

Thanks for meeting with me. This worked out well, meeting here at the new campus before tonight’s Alumni Christmas Party.

It’s great seeing the new campus, I have stayed close to CRSM. I’ve been helping on a number of trips – to St. Mary’s University and quite a few retreats – four or five if I’m remembering correctly.

I also heard that when you were here as a student, you had a 3.18 average and you racked up a lot of service hours.

That’s true. At one point, it seemed like I was signed up every week. I participated in all of the long trips and accumulated a lot of hours…[smiling] I kinda became the “volunteer girl”.  I’m currently investigating a service opportunity. I’ve applied at JVC (Jesuit Volunteer Corp.)

That’s certain to be a transformative experience. I’d like to talk about some of the other transitions you’ve made; for instance from primary school to Cristo Rey and then into the work study program.

I grew up 5 minutes from CRSM and attended Catholic grammar school; so coming to CRSM was not a difficult leap. I would say that my work study experience was definitely a wake-up call. I was always an outgoing kid. But in work study, I found myself surrounded by serious adults – in serious situations. I found myself working with numbers, or data, and it mattered what I did with that information.

It sounds like you took your business partner assignments seriously.

The seriousness of the work place was not lost on me.  I worked at Stabin House, (note: a facility for homeless women with children), Grainger and Stericycle. My parents were a good example for me as well. My dad was at Stericycle for 25 years and my mother runs a successful cleaning company.

Very goal oriented people, they were supportive around your college efforts?

Absolutely. I’m first gen college. My parents immigrated from the same small town in Mexico.  They didn’t know each other in Mexico – they met here in the US. But they were committed to, as Dr. Odiotti always says, getting me to and through college. But that goal was NOT easy.

Meaning, the goal of college?

Yes, college and finance. As a first gen college family, I…we…knew nothing. FAFSA, scholarships, grants, loans – it was almost gibberish. The CRSM counseling department got us through. Ms. Chavez was there for me. She actually came up to Carthage College to help. At one point, I lost federal Pell Grant monies.  Cristo Rey awarded me the Promise Scholarship. They are largely responsible for my graduating from college. CRSM has always been there for me.

Well, you reached that goal early; graduating in 3 1/2 years. What’s next? I heard law school was on your radar.

Not any longer. I visited a number of schools and realized that law school is not my passion – it’s Congress, I want to run for the Senate. I’ve worked on a number of Republican campaigns; unlike the Dems they pay their interns, so I’m now ready to get involved with the Democrat’s critical efforts in Wisconsin.  I see myself starting my career in the 10th District, but I want to get my Master’s in Gender Studies at DePaul.

Was your Bachelor’s thesis on gender studies?

No, it was an exploration of the policies, rhetoric and racism within the Trump Administration and similar xenophobic movements going back to the 1800’s.

Your parents must be really proud, a Bachelor’s – going on for your Master’s.

They are proud. Although they are way more conservative than I am. They’re not saying where did we go wrong [laughing] but my more progressive views do make them a bit uncomfortable.

We’re almost out of time. I often ask if people if they have any thoughts for CRSM students and grads – any words of wisdom for them?

Well, I was a freshman during the 2016 election – so I guess I would say: speak up, don’t stay silent. And when I’m in office, [smiling] my interns will be from Cristo Rey.