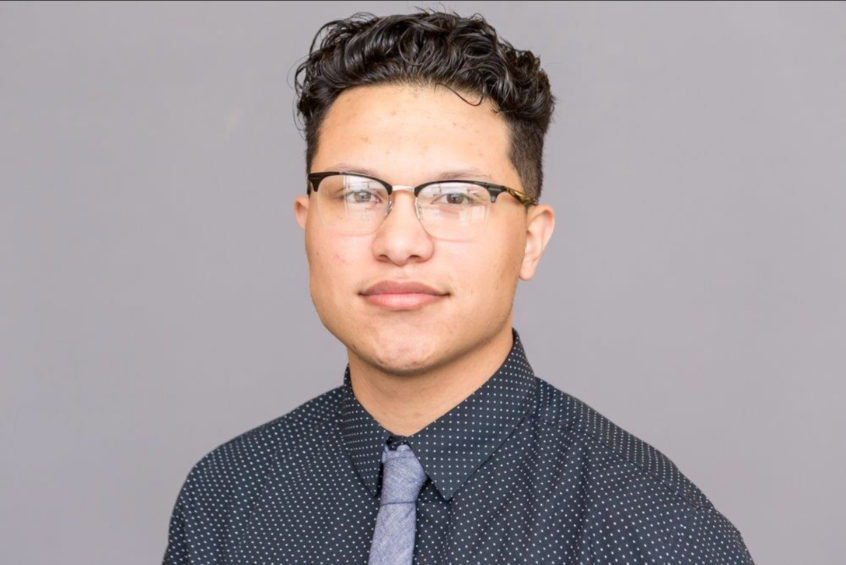 I caught up with Oscar (CRSM ’17, College of the Holy Cross ’21) while he was in New York City. He was good enough to take a time out for us during his semester internship with the Clinton Foundation. We spoke about his time at CRSM, tapping into the Cristo Rey Network and the transformative effect that CRSM had on his whole family. The following conversation has been edited and condensed.

Thanks for taking the time today. We saw each other briefly at the reunion at CRSM. I didn’t know at the time that you were headed to NYC.

No problem, I love talking about Cristo Rey. The last time I was back to the new campus was winter break. It’s been really busy ever since I accepted the internship with the Clinton Foundation.

I’d like to talk more about the internship, but I’m also interested in talking about the things that led up to that success. Was it always obvious that you were going to CRSM?

It was to my Mom (laughs). I was in public school and I was captain of my soccer team, I wanted to go to school with my friends. My mother did not want me to go to public high school. My aunt went to Cristo Rey and my mother insisted that I go to CRSM. I was very lucky. That turned out to be a very important decision for the whole family.

And it looks like it went really well, you graduated with a 3.7 grade point average.

There were some rocky times. As I began my freshman year, my family went through some tough changes. As I and my 3 sibs worked through those changes, it also became clear that middle school had not prepared me well. So if I wanted to accomplish something “major”, I had better step up my game. After many nights with 2- 3 hours of sleep and a commitment to the Schuler Scholar Program, my academic performance got up to speed.

It sounds like diligence and grit carried the day. You used the term “something major”, where did that come from?

My grandfather and I talk almost every day. He is a very disciplined man and always had high expectations of me. He used that term quite a bit. And now that you and I are talking about this, I would say my dad is a really a hard worker, my grandfather is very disciplined, and my mom is very bright. I like to think I got a few brains from her as well!

It sure sounds like that happened; a Schuler Scholar, a high GPA, acceptance into the College of The Holy Cross…

It wasn’t quite that simple. I ended up leaving the Schuler program for senior year, which was not a positive thing. I became worried about working on my own on the college search and acceptance process. But I got lucky again. The Counseling Department, especially Ms. Kainic, were all there for me. Many, many extra, hours were given to me. If it weren’t for those efforts, I would not be at Holy Cross. I saw thirteen colleges, but I was encouraged to participate in a “fly-in” to Holy Cross and I fell in love with the school.

So the fly-in visit made your decision easy and you were accepted. In terms of academics, how is the transition from high school to college going?

It’s going very well. I changed my major from Pre-Med to Business & Psychology. As a result, purely by coincidence, I met a mentor/alum who was connected to Cristo Rey. That’s how I found out about COHC’s internship in New York with Clinton Global Initiative University. They mentor and provide seed funding to student innovators from many different campuses.

Congratulations. It sounds like a fabulous opportunity. I know your work-study experiences with Gewalt Hamilton Associates and Discover Financial were very successful as well. Did those experiences change you?

Completely. In fact, I still work for Discover when I’m home from school. This is what we talked about earlier; if I hadn’t gone to CRSM, I don’t know where my life would have gone. It is the single most important event of my life. It didn’t just change me, it changed everything – my acceptance into college, the ability to earn money during school, the way I interact with people in business, even the way I dress. It changed my family. I wouldn’t be as close to my parents as I am now. And I wouldn’t have become a role model for my younger brothers and sister.

We’re almost out of time – with a 35 page paper in the works, I know your free time is at a premium. How do you use the little that you have?

Well, because of my love of soccer I enjoy training and playing club. I’ve been able to get to some of the museums here in the city with the other foundation winners. I’m also having fun working on my public speaking skills.

Thanks for taking the time. Anything that I forgot to ask you?

When I start making some money, I want to go to Barcelona. And when I do start earning, I plan on contributing to Cristo Rey St. Martin.