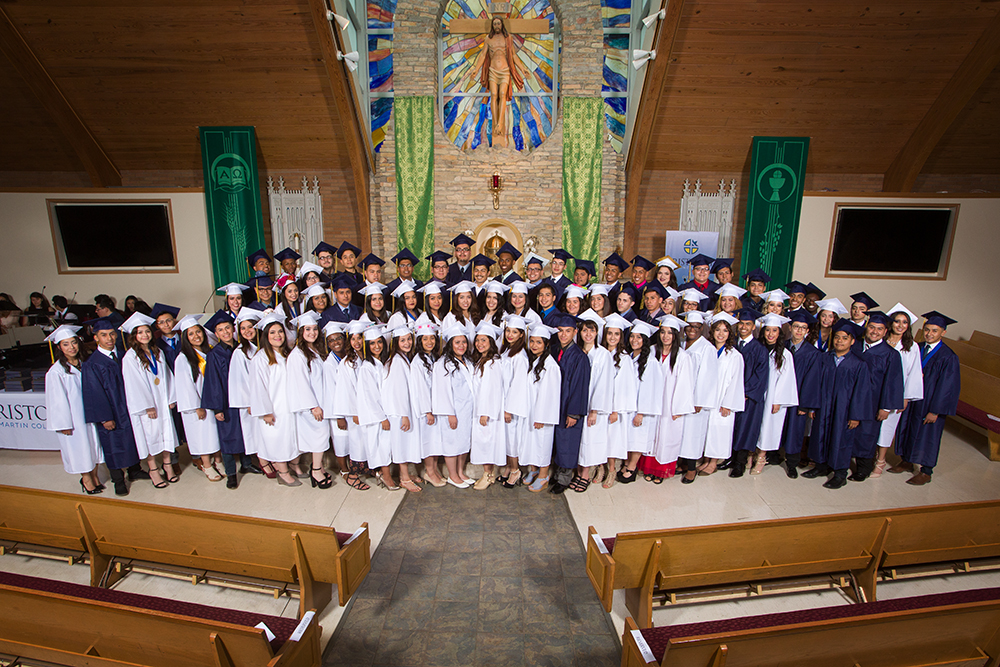 Cristo Rey St. Martin College Prep is sending nearly 100 percent of its graduating class to college. On Saturday, June 4, 2016, 78 members of the Class of 2016 received their diplomas at a Baccalaureate Mass and Commencement Ceremony held at Most Blessed Trinity Catholic Church in Waukegan. Next fall they will attend colleges across the country including Duke, Georgetown, Loyola, Marquette, Dominican and Marion universities and the College of Holy Cross.

The academic achievements underscore several significant benchmarks achieved by the 10th graduating class in this Waukegan school’s history. Other honors include:

• 94 percent of graduates accepted into four-year Bachelor’s programs; compared to 40 percent in 2007
• Graduates were awarded a total of $17,349,976 collectively in scholarships, up from $10,365,756 in 2015, and $800,000 in 2007
• For the fifth consecutive year, CRSM was named one of “America’s Most Challenging High Schools,” by the Washington Post, a recognition achieved by only nine percent of high schools nationwide

This is significant in Waukegan where it is estimated that only one in 10 teens graduate from a four-year college.

“Today, as we say goodbye to the Class of 2016, we find ourselves pausing in the moment, pausing to celebrate successes, to revel in friendships made, to acknowledge accomplishments with rightful pride, to be filled with a sense of incredible gratitude,” President Preston Kendall said. “But there is a duality to this moment. Even as we reminisce about how we arrived here, we also know that we are standing on the doorstep of our futures. We look with hope to continuing a journey that, especially for our seniors, is really only just beginning. May You, God, be our constant companion and the center of our journeys. Yesterday (during the senior sendoff ceremony), one of the students walked across the stage and said ‘I did it.’ Today, Class of 2016, you did it. Congratulations.”

Principal Mike Odiotti congratulated the Class of 2016 saying “you are special for a number of reasons. You have reached many benchmarks in our school’s history. But more importantly, you have created a strong sense of family, a community determined to take your skills and make a difference in the world. In the words of St. Ignatius, ‘Go forth and set the world on fire.”

Robert James “Bob” Dold, Jr., the U.S. Representative for Illinois’s 10th congressional district, and George Fornero, Chief Academic Officer for the Cristo Rey Network, were among the notables attending the Mass and graduation ceremony, along with more than 100 families and friends of the graduates, CRSM staff, teachers and alumni, and representatives from CRSM’s endorsing communities – the Sinsinawa Dominicans, the Society of Holy Child Jesus and the Clerics of St. Viator. Dold also delivered congratulatory notes to each of the graduates. The presider for the Mass was Fr. Jamie Mueller, associate pastor of Most Blessed Trinity.

Cristo Rey St. Martin is part of The Cristo Rey Network of 30 high schools from Portland, Oregon, to Brooklyn, New York. This national network succeeds in getting low-income, minority students ready for college through its unique work-study model by having them pay their way through internships with prominent companies where some find post-college careers.

When CRSM opened in 2004, it was the first Lake County Catholic school to open in 40 years.