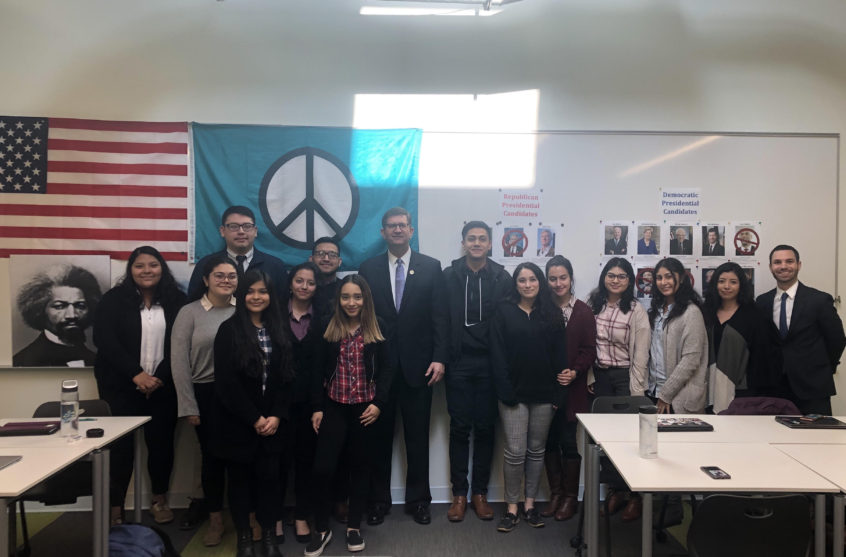 You may remember that last November, five Cristo Rey St. Martin students traveled to Washington, D.C. to attend the Ignatian Family Teach-In For Justice. They had a meeting at the office of U.S. Representative for Illinois’ 10th congressional district, Brad Schneider.

The Cristo Rey Group focused their legislative advocacy on climate change and environmentalism. Congressman Schneider’s office scheduled a meeting with the delegation. Mr. Tommy Brown, Legislative Assistant at the U.S. House of Representatives, listened to CRSM students’ concerns and formal support for specific bills that would affect local flooding and air pollution issues near the Cristo Rey St. Martin Campus. A follow-up meeting with the Congressman was promised.

On February 19th, Congressman Brad Schneider did just that with the CRSM students who visited his office in Washington. Students escorted the Congressman to a classroom where he taught the AP Government class and discussed the November advocacy meeting re: environmental issues that took place in D.C.

Students raised their concerns regarding the presence of ethylene oxide in Lake County with Congressman Schneider. He noted that he is working at both the State and Federal levels to pass laws to obviate the problem.

Students were also able to ask questions about how Congress really works. The Congressman described his upcoming co-sponsorship of bills as a member of the House Ways and Means Committee and described for the students how legislation gets developed. Students asked him to speak about Congress’ role in limiting Executive power, the impeachment process and its limitations.