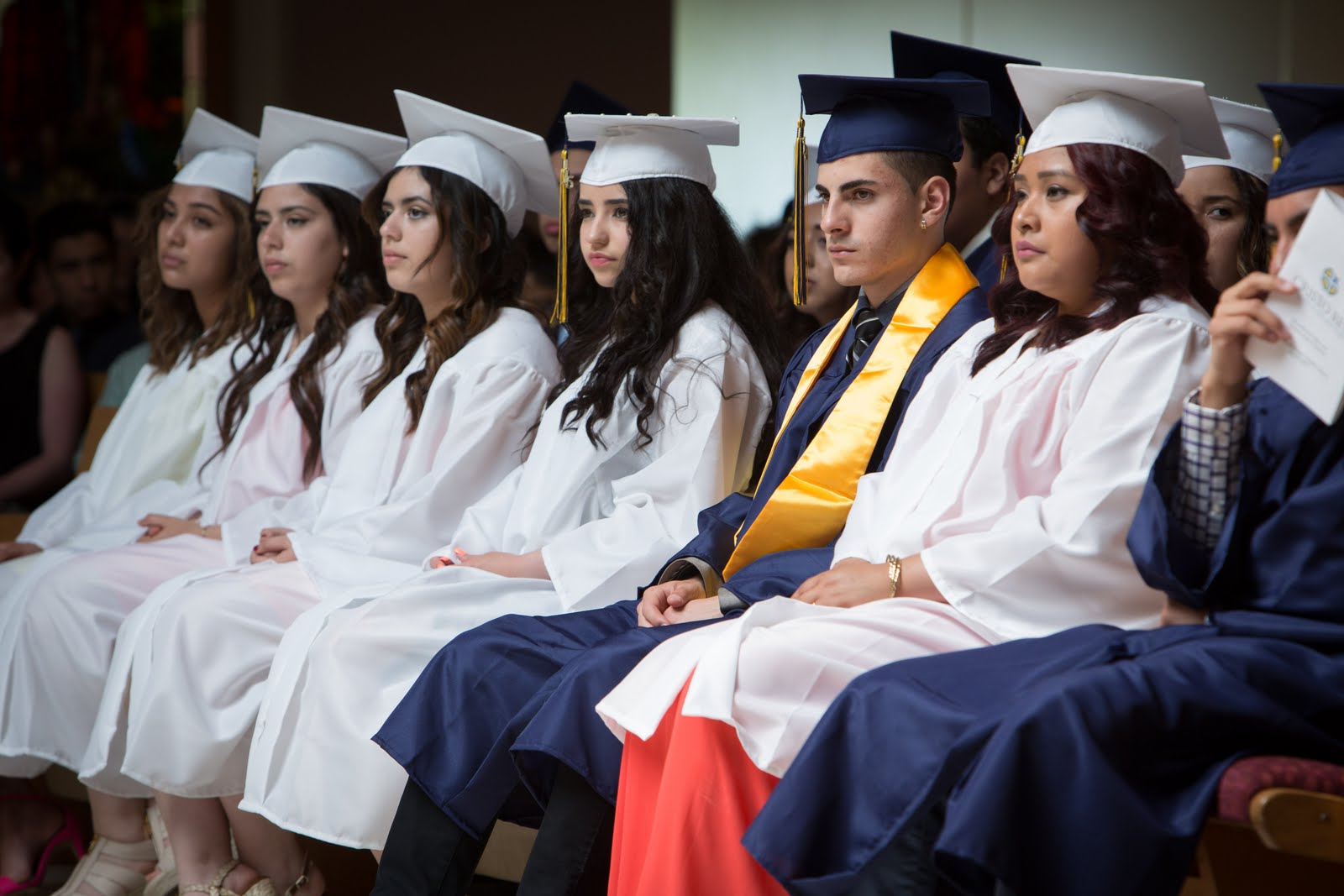 Cristo Rey St. Martin College Prep is sending 100 percent of its graduating class to college. On Saturday, June 6, 71 members of the Class of 2015 received their diplomas at a Baccalaureate Mass and Commencement Ceremony held at Most Blessed Trinity Catholic Church in Waukegan. Next fall they will attend colleges across the country ranging from John Hopkins, Loyola, Marquette, DePaul and Dominican universities to Bates and Carleton colleges.

“Great things are happening in Waukegan,” Fr. John P. Foley, S.J. ,Founder, Chair Emeritus and Chief Mission Officer for the Cristo Rey Network told the students, parents, teachers, staff, corporate work-study partners, board members and friends gathered for the event. He presented CRSM with a 200-year-old statue of the school’s namesake, St. Martin de Porres, from Peru. “You are our hope and part of a movement. Everyone in the Cristo Rey network is watching and talking about the exciting things and accomplishments you are making in Waukegan. Thank you. But I must warn you too, that once St. Martin gets a hold of you, he grabs you and doesn’t let you go. I first read about him when I was an eight-year-old boy and here I am today. He will guide you.”

Many members of the graduating class have been awarded several scholarships – a total of $10,365,756 in college scholarships collectively, that they will use in the next four years. In CRSM’s relatively short 11-year school history, graduates have received prestigious scholarships from Gates Millennium Scholars Program, Golden Apple Foundation, Horatio Alger Association, Loyola University Cristo Rey Scholars, and Marquette University Urban Scholars to name only a few.

Presider Fr. Tom Von Behren, C.S.V., who celebrated the Mass told the Class of 2015: “You have been in our hearts and prayers since the moment you walked in the door. Today you are at a crossroads and something new and exciting is about to happen in your lives. My hope is that you will look back and see that you have made a difference, and that you will bring the hope, excitement and love you found at Cristo Rey into the world. If you bring that spirit, that is the kind of people you will meet, people who will embrace you with that love and hope too.”

“Today is your day,” President Preston Kendall said to the graduates. “But you didn’t get here alone. Look around you at your parents, brothers, sisters, teachers, staff, work sponsors, the board, they formed a partnership with you because they believed in you. Today is also a chance to say thank you to them for their dependability, selflessness, generosity, time and talent. Pause today, step back, reflect and celebrate. Everyone here is a person for others and they all love you. When you leave here, you have everything inside of you to be successful.”

Principal Mike Odiotti received a round of laughter from graduates when he told them they were “on fleek,” meaning “you look truly fabulous today. You are a class that has achieved excellence and set a benchmark for future classes.” He lauded the milestones reached:

“You are academically strong and have formed a strong bond of community and family. You will take that spirit, skills and the values you have shared for the last four years out into the world to make it a better place. We know you will make your mark on the world and I am excited to see you go forth and set the world on fire.”

Kendall also paid tribute to the important component of the students’ education – the Corporate Work Study Program, where students spend 25 percent of their time.

“Through the Corporate Work Study Program and our college-focused curriculum, students are dreaming of possibilities for their futures that are grounded in reality,” said Kendall. “When a student says, ‘I want to be a mechanical engineer.’ He or she knows the math demands of that career, the top colleges in the country with engineering programs and each program’s admission requirements. He or she also knows one or more persons with careers in mechanical engineering because they are colleagues from the Corporate Work Study Program. Our students’ dreams are not fantasies of what they might become, but serious visions of what they are capable of doing with their lives once they choose to dedicate themselves to the pursuit.”

At the conclusion of the Mass and ceremony, students received a blessing from members of CRSM’s endorsing communities: Sinsinawa Dominicans, Society of Holy Child Jesus and the Clerics of St. Viator.