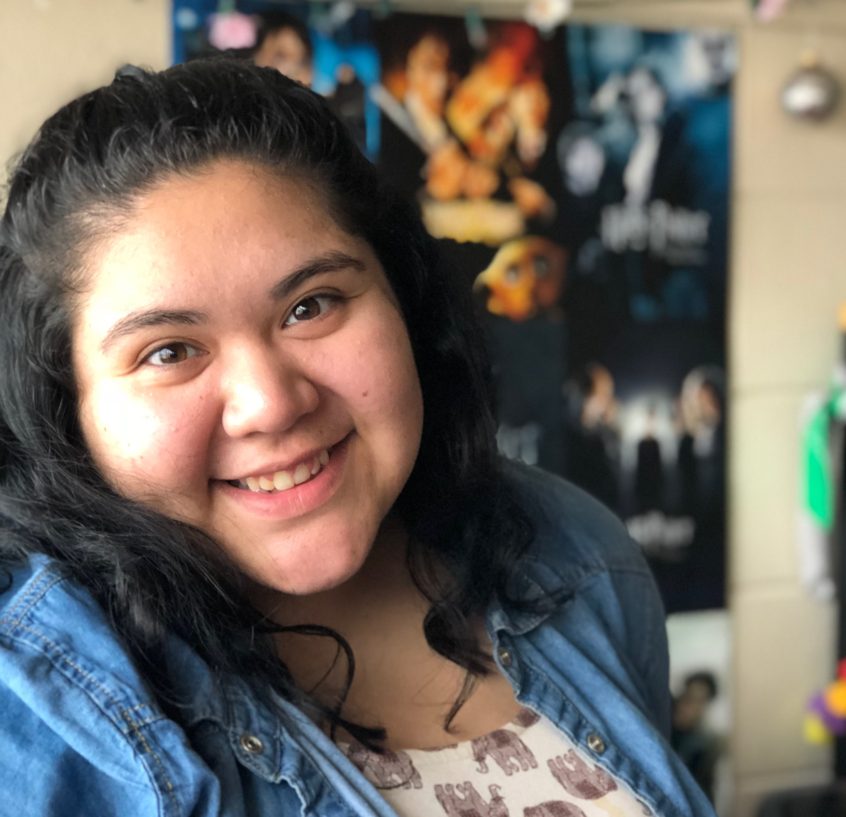 The days are long and the numbers hypnotizing during this busy tax season for college sophomore and CRSM alumna Leslye Soberanes. Not only is her mind focused on maintaining her 3.5 GPA and supervising a collegiate dorm, she’s working nonstop nights and weekends to help immigrants prepare and file their taxes. With a double major in accounting and marketing, she hopes to pass the CPA before college graduation and work in auditing accounting, “and see what path that will take me on.”

Exploring the unknown and new opportunities at school, work and play are at the heart of the journey she says she was inspired to take as a student Cristo Rey St. Martin.

“The world has opened up so much for me,” says Soberanes, home on her spring break and visiting the new campus. “I feel that the reason I have so many opportunities is because of CRSM. Mrs. Dippold went the extra mile to try to find a way for me to be able to afford college. Life can be crazy, but all of the teachers are behind you. And, Mr. O. (principal Mike Odiotti) with his lessons in grit, have taught me that I can get through anything life throws in my path.”

Though she attends Carthage College on a four-year President’s Scholarship, she juggles several part-time jobs to cover the 25 percent of the $38,000-plus tuition not covered by the funding. Of the 300 students who applied, she was one of 30 students to be named a president’s scholar.

For the CRSM Class of 2016 graduate and oldest of five, that means commuting from the Kenosha, Wisconsin campus some nights, weekends and semester breaks to switch from her numbers’ hat to her marketing/sales role as a sales associate at the tween clothing retailer, Justice, at Gurnee Mills.

Last summer she worked as a volunteer camp counselor at Camp Tannadoonah, a resident camp for children from foster homes that is located on Birch Lake in Vandalia, Michigan. Over the winter holiday break, she traveled to London to spend time with peers, the other camp counselors she met there.

Soberanes says she honed her business skills through the Cristo Rey Corporate Work Study program where she worked at Takeda Pharmaceuticals in several roles throughout high school. As a Global Medical Affairs intern, she helped proofread medical publications that were submitted to vendors and helped organize team meetings and work on the department’s budgeting. She also worked as an analytical science intern.

She was a sophomore when she transferred to CRSM from St. Joseph Catholic Academy in Kenosha. At CRSM, she took an active role in many organizations including: National Honors Society and Student Council. She was the Yearbook Editor, a Student Ambassador, captain of the volleyball team and on the homecoming committee. She also was a regular volunteer at Feed My Starving Children in Libertyville and the Northern Illinois Food Bank in Park City.

Her brother, Manuel, is a freshman at CRSM and she hopes her two other sisters and brother will follow in both of their footsteps.

“When I transferred to Cristo Rey I knew I was supposed to try my best in high school,” she says. “But I wasn’t trying as hard as I could, or rather I didn’t know I wasn’t trying as hard as I could. The teachers had expectations that far exceeded my own, but with their encouragement, I pushed to get better. I know today that a little bit of encouragement can go a long way. I owe all the opportunities that have opened up for me to the CRSM community that kept pushing me to keep trying harder and to seize any chance that came my way. I also learned that it is okay to be different, that we need to accept all people, even when they are different than us.”