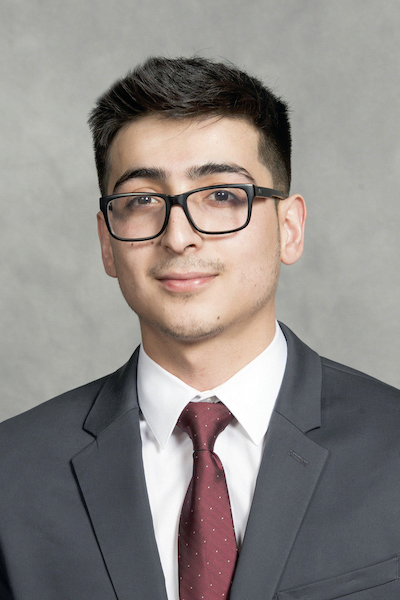 I talked with Rogerr (CRSM ’13  NIU ’19) from his office at home in Gurnee, IL. His journey to graduation from Northern Illinois University involved enough twists, turns and detours to discourage any driver. But Rogerr (yes, two Rs) is not like most. His gracious and unassuming attitude comes through immediately, as does his intellect. The course of his academic career belies his abilities, much less his persistence.

Good to talk with you again. We last spoke at the Alumni Christmas Party; as I remember you were finishing your undergrad work at Northern Illinois University.
Yes, we talked about my degree in Operations & Information Management with a minor in Data Analytics and my working for Discover.

I assume it all happened according to plan?
Happy to say, it did.

You say that with a smile…
Well, as I mentioned, even though I wanted to go to NIU since I was a freshman at Cristo Rey, my plan didn’t happen the way I expected.

Let’s talk about that. You grew up in Waukegan, and Cristo Rey was going to get you to NIU. Were you the first one to graduate from university?
Yes, and I was lucky. My grades at CRSM were unimpressive, I said I wanted to go to NIU as a freshman, but I couldn’t have given you a good reason why. I played on the soccer team, but the fact is, I drifted through the first two years at CRSM, not doing my best.

Was your Work Study experience good?
Yes. It was a big help to me. I learned a lot. I worked at Pactiv, two locations for First Midwest Bank, which peaked my interest in business and finance. I also worked at a great company called Learning Resources in Vernon Hills.

Around my junior year I began to realize that all my friends were doing great things, and that started to motivate me. Thanks to the Counseling Department’s hard work, I was connected to NIU’s Chance Program; they recruit and admit students to give them an opportunity. I was accepted; and in my first year I received the Chance Award for high GPA.

And the rest, as they say, is history.
Not quite, but that’s a long story.

No worries – all the time in the world.
Well, after the initial excitement of a new environment, I had some very low points. My transition at college became more and more difficult. Being away from home was tough for me. I lost connection with my family, far from home where I would get re-energized. My goals weren’t in front of me, or they didn’t fit. For a number of reasons, I lost motivation.

I pulled it together and worked really hard to get the grades needed to enter NIU’s College of Business. But it wasn’t long after entering that I realized I was not going to finish as a Finance major. It just wasn’t me; I was chasing what other people wanted me to do.

I had “wasted” all this time, money and effort. It was disheartening to have worked so hard for a goal and then realize it doesn’t fit. It took me over six years to finish – working and catching up.

How did you turn it around?
At a very low point, I spoke with the director of OM&IS (Department of Operations Management and Information Systems), he was struck with my abilities and interest in the tech side of business. He offered me a spot and told me he’d start me off slow.

So, I “started over”. It was a perfect fit for me. After my 2nd semester in the program, I was approached and asked to join a new workshop called SCRUM*. It’s a relatively new framework for developing software.

I was invited to other groups doing this same type of work, and that connected me to Discover. They offered me an internship; I ended up doing 2 semester internships with them. Our group was invited to do presentations to upper management at the company, a fabulous opportunity. It worked out, I graduated with the OM&IS Academic Excellence Award.

I was offered a full-time position. Since then, I have been pursuing more certifications as a Scrum Master, which is now my title at Discover. I’m working in a facilitative role with software and product developers supporting our Mobile App. I’m teaching people how to function within the framework.

That was quite the circuitous route, but what an outcome. Looking back, anything jump to mind that you’d change? I like asking that because it’s particularly relevant for younger readers.
Yes. I see CRSM students working at Discover, we are a huge supporter of the school. My first reaction is, I’d change plenty. But on second thought, there was a time when people asked me where I was from; and I avoided saying Waukegan. Not anymore. I’m proud of where I come from, what I’ve done and where I am.

If I changed things, I might not have learned to become flexible, and that sometimes it’s ok to not know what to do, because that means there’s something exciting out there waiting for you.

*Scrum is an agile framework for developing, delivering, and sustaining complex products, with an initial emphasis on software development, although it has been used in other fields including research, sales, marketing and advanced technologies. It is designed for teams of ten or fewer members, who break their work into goals that can be completed within timeboxed iterations, called sprints, no longer than one month and most commonly two weeks. The Scrum Team track progress in 15-minute time-boxed daily meetings, called daily scrums. At the end of the sprint, the team holds sprint review, to demonstrate the work done, and sprint retrospective to continuously improve.